In Ahmadou Kourouma's fourth and final novel, the 10-year-old narrator is forced into military service in Liberia 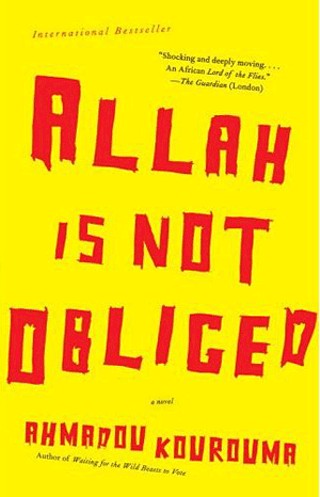 Allah Is Not Obliged


"Allah is not obliged to be fair about all the things He does here on earth."

At least that's the opinion of 10-year-old Birahima, the young protagonist of celebrated African novelist Ahmadou Kourouma's masterpiece. Kourouma was born in 1927 in the Ivory Coast. He fought in the French colonial army as a young man in Indochina and later studied science in France before turning to writing.

Allah Is Not Obliged is Kourouma's fourth and final novel. The author died in 2003 but left behind several plays in addition to the novels. In this book, which powerfully lays before the reader the tragic absurdity of war, young Birahima leaves his home following the death of his mother and, accompanied by sorcerer and cook Yacouba, sets out to find his aunt Mahan.

While crossing the border into Liberia, they are captured and forced into military service. Forced to fight in the horrible civil wars that have plagued West Africa for years, Birahima is given a machine gun, some dope, and very little food or money.

Former Liberian dictator Charles Taylor -- no mere fictional villain -- appears in Kourouma's book as a source of the young child soldier's scorn. Taylor is, of course, now on trial for war crimes -- genocide -- and Birahima brutally tells us about real-life practices such as cutting the hands off of potential voters, people who should have had a say in their supposedly democratic governments.

The novel depicts a horrible world filled with death and dismemberment, torture and madness, and is despairing yet filled with laughter, as Birahima somehow manages to keep his sanity.

In America today, it is popular to dismiss Africa as a lost cause, a place where Bono, Brad Pitt, and Madonna cavort about trying to call attention to the problems plaguing the continent -- real pressures set into motion by European, and later American, colonial activities -- but focusing more attention on themselves. It's a shame, because the reality is that Africa truly needs the world's help right now. If it is to receive it, more trans-Atlantic distress signals like Kourouma's will be crucial.

Notes of a Football Addict (Vol. 1)
Fat men in polyester shorts and more