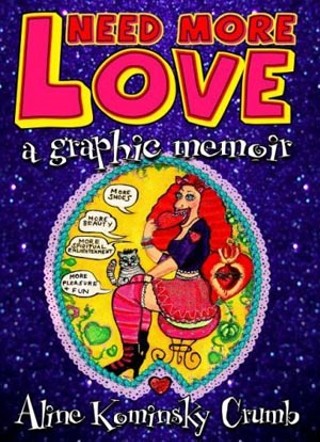 Before the outgrowth of women's confessional literature clogged the bookstore shelves and the blogosphere, there were confessional women's comics – found in such publications as Wimmen's Comix and Twisted Sisters, Dirty Laundry Comics, among others. Most of all, there was Aline Kominsky Crumb, the common ingredient in the collections listed above, who has spun the autobiography of her life into Need More Love, the first hardback collection devoted exclusively to her work. The book includes comic strips and individual panels (in black-and-white and color), prose recollections and testimonials, paintings, photographs, and memorabilia to tell the story of her journey from her Jewish baby-boomer childhood on Long Island to her Sixties counterculture rebellion in the East Village, unwanted pregnancy, failed first marriage, discovery of underground comics, marriage to the more famous and notorious artist Robert Crumb, the parenting of their daughter Sophie, open marriage, and relocation to France in the Nineties.

Kominsky Crumb has rarely been given her professional props and has been popularly regarded primarily in the subordinate role of muse to and creative partner of Robert Crumb. Her cartooning style is more ragged than the great man's – the inventor of such immortals as Fritz the Cat, Mr. Natural, and Devil Girl. Therefore, many have viewed her as a opportunist, a would-be Yoko to Crumb's John, despite the fact that she has been making what she calls "ahrt" since she was 8 years old. Some, like the rigid feminists of the Wimmen's Comix collective, felt that she was sleeping with the enemy and not sufficiently feminist to be a member of their crew (a particularly interesting chapter of this book). Others in the present question why, upon seeing the occasional cartoons Kominsky Crumb and her husband mutually pen for The New Yorker, she allows Crumb to draw her so unflatteringly while curiously failing to recognize that she draws her own image and that the panels are fully collaborative.

Anyway, it's all here in Need More Love, Kominsky Crumb's reflections on the last five decades. When last many of us saw her it was in the closing moments of the 1994 documentary Crumb, as she and her family were pulling up stakes in California and heading toward the French countryside. In addition to its autobiographical edge, this book offers insights into the history of underground comics and their creators. And for rebellious Jewish American princesses now in their 50s, Kominsky Crumb is a voice of illustrative clarity and hilarity.

Need More Love: A Graphic Memoir, Aline Kominksy Crumb, MQ Publications, there were confessional women's comics; most of all, there was Aline Kominsky Crumb