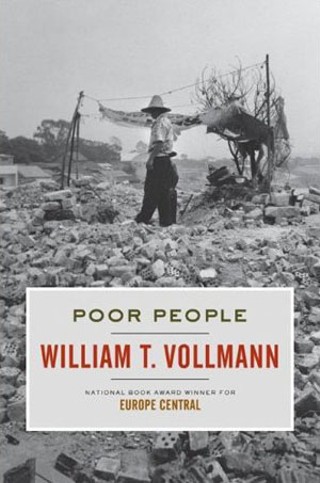 A well-regarded essayist from India wrote some years ago that the South Asian middle class wears sunglasses to avoid seeing the massive poverty of that nation of a billion souls. For award-winning American author William Vollmann, the world's rich are now in danger of closing a steel door on poor people around the globe. Vollmann clearly hopes the so-called essay in his meaty new volume, Poor People, will not only keep that door propped open but will prompt readers to lift their shades, rose-colored or otherwise.

From the streets of San Francisco to the mountains of Afghanistan and beyond, Vollmann roams, interviewing destitute, impoverished men and women in an effort to glean "Why some are rich and some are poor." It's a noble inquiry, which makes the potential pitfalls of the endeavor more palpable to class-conscious readers. For those familiar with Vollmann's recent nonfiction Rising Up and Rising Down, as well as the 2005 National Book Award winner for fiction, Europe Central, there are early intimations that this mash-up of gonzo reportage, travel pieces, and interpolated interviews cannot compete. "I have decided brevity was more important than inclusiveness," Vollmann writes in one of many footnotes contained by this volume; in turn, the reader is left pondering many questions.

Claiming that "poverty is not political," the author attempts to outflank Marxism as the 20th century falls to history. Despite some admirable mental jujitsu – he asserts that prostitutes have relative freedom but turns all his poor sources into something akin to whores by paying them for their time and stories – Vollmann stumbles at far too many interludes. For instance, he opines that one problem poor people must contend with is a lack of imagination reflecting a lack of literacy and education, and then a few pages later, he accuses the rich of likewise failing to see beyond their material circumstance. Yet Vollmann never determines whether this shortcoming is a source of comfort or conflict.

Vollmann remains a perceptive, nuanced raconteur. So, if Poor People fails as an essay, it still serves as a vital reminder that our common humanity transcends economic privilege.