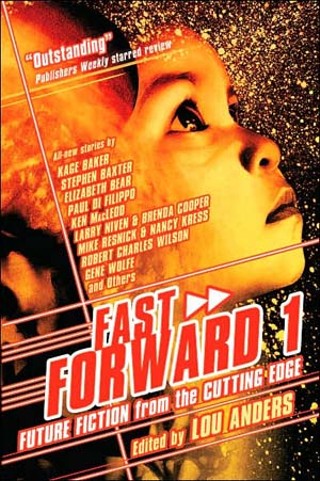 From the 1940s through the early 1980s, the anthology of original short stories served as the backbone of the science-fiction field, reaching its zenith in the 1970s with original anthology series such as Harlan Ellison's Dangerous Visions, Terry Carr's Universe, and Robert Silverberg's New Dimensions. Fresh ideas and new writers often emerged from these books, which were sold in bookstores and therefore able to reach mass audiences. Recently several new series – Polyphony, Adventure, and Leviathan to name a few – have premiered to revive the formerly moribund format. With Fast Forward 1: Future Fiction From the Cutting Edge, acclaimed editor Lou Anders joins the fray.

Behind the dazzling John Picacio cover, Fast Forward opens strongly with the Hugo-winning Robert Charles Wilson's "YFL-500," a tale of futuristic art and the dreams that fuel it. Several stories throughout equal the quality of the first. In "Aristotle OS," Tony Ballantyne presents an insightful glimpse into a world-changing operating system. Elizabeth Bear pens a unique take on alien invasion and childhood autoerotic asphyxiation with "The Something-Dreaming Game." "Jesus Christ, Reanimator" by Ken MacLeod, possibly the best short-story title of the decade, posits the inherent conflicts in the Second Coming.

In his introduction, Anders states that his goal is to emulate previous groundbreaking science-fiction-anthology series, most notably Fredrick Pohl's Star SF (six volumes from 1953 to 1959) and Damon Knight's Orbit (21 volumes, 1966-1980). If successive volumes equal the quality of this excellent debut, Fast Forward will go a long way in achieving Anders' hope and might even inspire a new generation.