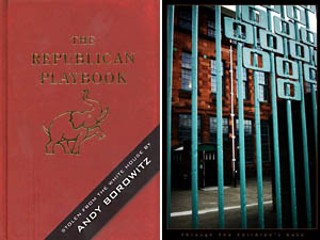 Through the Children's Gate: A Home in New York

As a longtime contributor to The New Yorker and the mind behind the political humor Web site The Borowitz Report, Andy Borowitz has honed the art of satire to a fine point. One could argue that he now stands in the rarefied company of Woody Allen, S.J. Perelman, and David Sedaris as one of the great humor writers in The New Yorker's history. (His piece on Hitler's unheralded sense of humor in the May 22 issue, for example, was one of the funniest things I've read in that magazine in years, and that includes all of those comics about giraffes with stock options, which, to be fair, I might just not get.) But satire is a dodgy business, and one has to be careful when one chooses a subject; too easy a target – reality TV, say, or modern country music – and satire can slip into farce. Which is, unfortunately, the problem with Borowitz's newest book, The Republican Playbook.

Purporting to be the secret political guidebook of the GOP, the book is broad in its humor and expansive in its reach, touching on everything from Bill Frist's long-distance diagnosis of Terri Schiavo and George Bush's reading of My Pet Goat to Howard Dean's infamous yelp at the Iowa caucus and Dick Cheney's recent hunting mishap: in other words, old news all picked clean months or even years ago by countless other comedians. To satirize the current president, his neo-conservative supporters, and their pageboys at Fox News is, to a certain degree, to engage in a redundancy. At this point in history they've done all the work for us, and it takes an exceptionally subtle and original wit (like Jon Stewart, on a good night) to find new angles on the absurdities that pass for Republican policy. Andy Borowitz is blessed with such a wit, but with The Republican Playbook, he chooses to play it safe, settling for easy jokes about administration doublespeak and conservatives' fear of gay cowboys rather than reaching for the subtler, deeper, more scathing heights of true political satire.

The essay, much like satire, is a potentially perilous medium, full of bristles, nettles, and briars. Authors often use it to write about the most personal topics, and if they aren't careful, their musings on family, illness, and childhood can tumble into sentimental self-importance. In his newest collection, Through the Children's Gate, New Yorker writer Adam Gopnik dodges this land mine with apparent ease. An essayist for more than 20 years, Gopnik possesses a remarkably sure and individual style; few writers working today are capable of balancing erudition with such warmth and humanity. In this wide-ranging selection of essays, Gopnik tracks his family's return to New York City in 2000, after five years of living abroad. Using his children's eyes as a lens through which to view his former home, Gopnik writes passionately about the new New York: of safe streets, abundant strollers, and an abiding sense of geopolitical fragility and unease. Using tight, elegant prose and an unostentatious intellect, Gopnik ably captures the spirit of New York City in the post-Giuliani era, with its private schools, restored parks, and gentrified, child-friendly neighborhoods.

OK, so Gopnik does a great job of capturing the spirit of a particular New York City in the post-Giuliani era. He isn't interested in writing about the artists over in Williamsburg, the Poles out in Greenpoint, the West Indians up Gun Hill Road in the Bronx, or even the new yuppies down in the East Village. His focus is the children's wonderland that upper Manhattan has become for those whose parents can afford to buy them access. And he writes about it beautifully, painting a picture so moving it could make a weaker soul than I pine for life back in the city – even if that life was lived in a Brooklyn garret, far, far from the warm glow of the Upper West Side.