Chuck Klosterman reels in the years 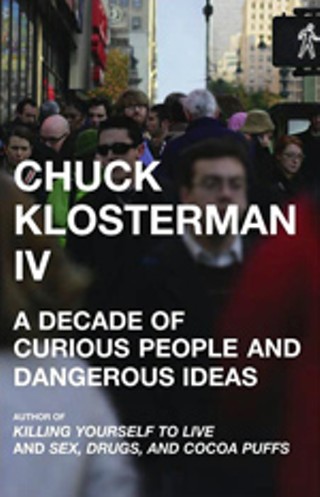 Chuck Klosterman will be at BookPeople on Thursday, Sept. 21, 7pm.

Chuck Klosterman is like the Lawrence Welk of pop culture. His first book, 2001's Fargo Rock City, chronicled his obsession with hair metal; subsequent books (2003's Sex, Drugs and Cocoa Puffs and last year's Killing Yourself to Live) have expanded from metal to include a journey of rock star death sites and an in-depth dissection of The Real World's loose bowels. His latest, Chuck Klosterman IV: A Decade of Curious People and Dangerous Ideas (Scribner, $25), is a collection of odds and ends from Spin, Esquire, and The New York Times Magazine. There's an interview with a chocolate-chip-cookie-chomping, pre-baby-dropping Britney Spears, as well as theories on robots and monogamy. He also smokes PCP.

Austin Chronicle: You write a lot about celebrity, and now you've kind of become one. Does that seem odd?

Chuck Klosterman: I don't feel like there's any celebrity nature to my life. Even the overwhelming majority of the book-buying public has never heard of me. Here's what usually happens: Someone will ask me, "What's it like to be a celebrity?" and I'll say, "Oh, I don't know." And then someone else will say, "He's not really a celebrity!" It's like they forward the idea in order to disagree with it later.

CK: I love your interview style; it's kind of like Charlie Rose.

AC: I think of myself more as a John McLaughlin. Anyway, you interviewed Britney pre-Federline. Seeing her now, has she changed at all? She's not really the sex kitten anymore.

CK: I have a certain degree of sympathy for her now. The interview was right around the time Fred Durst was claiming to have slept with her. And she was sort of trying to reposition herself as more adult. I mean, she was so insulated all through her teen years; she doesn't really have a context for what normalcy is. I'll be interested to see how she's perceived 20 years from now. If Britney really thought about the reality of her life – if she realized that right now there are at least five guys masturbating to fake pictures of her on the Internet – she would never be this famous.

AC: And on the opposite end of the celebrity spectrum, I found the piece about Val Kilmer kind of enthralling. Everyone thinks he's a weirdo, but he's just a normal guy with a buffalo ranch.

CK: He doesn't like to do interviews. I wrote something about him [in Esquire] that was sort of positive, and he seemed legitimately flattered by it. Like I was going to start the Val Kilmer fan club. He actually sent me a Christmas card.

AC: What kind of Christmas card does Val Kilmer [a Christian Scientist] send?

CK: Eh, maybe there was a tree on it. It was handwritten, too. Something about how I must be friends with his mother to write something that nice about him.

AC: The last book was "the death book"; this one's sort of a best of. Where do you see your writing going next?

CK: Well, I'm writing a novel, a piece of fiction. It might be a couple of years before it comes out. I often use my life as a literary device, and the problem with that is as my life changes, what I want to write about has to change. Like, I don't know how jazzed I would be to write a Killers profile.

AC: I noticed on the book jacket there's a quote from People magazine: Apparently you're the new Hunter S. Thompson or something.

CK: This is what happens a lot. People will make a bombastic statement, and I guarantee you the writer at People doesn't really think I'm like the new Hunter S. Thompson, but you have to write a story, right? We're both journalists who write in a style that involves ourselves a lot, and we take drugs. When Fargo Rock City came out, people said, "He's like Lester Bangs." Then Sex, Drugs and Cocoa Puffs came out, and someone said, "It's like Baudrillard for idiots." I have to admit I didn't know who Baudrillard was, so I went back and read some of his stuff, and I realized the person making that statement didn't know anything about my writing or his. I'm flattered by all these comparisons, of course, but everyone I'm compared to is so much better than me!

AC: Then there's the whole dangerous ideas aspect. Monogamy, advancement theory, the super race. Are you inching toward the political?

CK: Right now, in America, I find political discourse has never been worse. Maybe pre-Civil War was worse. But people want to read opinions that reflect their world view, and the Internet has accelerated this. People read the front page of the newspaper, and they don't believe it. Then they read the op-ed page, and they believe that. [With politics], I'm really interested, but I don't know if I have the personal engagement. I don't know if people are even interested in me writing about politics. I think they're more interested in what I think about the relationship between Blue Öyster Cult and Entourage.

AC: What do you think about the new season of Survivor? The race war!

CK: I'll be interested to see how they use it as a narrative device. I think as the show plays out, it will become very clear that they will have cast the show consciously to break stereotypes. They'll have five cast members who staunchly seem the opposite of every stereotype. You know, like, "Survivor's going to teach us a lesson," which in some ways is more insulting.

CK: The mainstream media and the blogosphere are both confused about their scope of influence. People are talking about it on the Internet, so Entertainment Weekly has to cover it. And if every blogger in the world is gonna go to this movie, it's gonna open like Phantom Menace numbers. But then it didn't; it did OK. Turns out people wanted to be involved with something, but they didn't really care.

CK: This is really cliché, but Axl Rose. And I'd really like to interview Alan Greenspan. I always found him incredibly fascinating.

CK: Maybe something for Interview magazine.

AC: One thing I wanted to ask you about the book's last fiction piece: Have you really smoked PCP before work?

CK: At work, no. When you're buying pot from somebody, they'll say, "This is really good pot, really expensive." So you buy the pot, but it's just cheap pot sprinkled with angel dust. So this happened to me and this girl, and it was the craziest hallucinogenic experience I've ever had. Her face was, like, shape-shifting, and then we decided it was best to go stand by the closet; it felt like the thing to do. And we stood by the closet for 90 minutes.