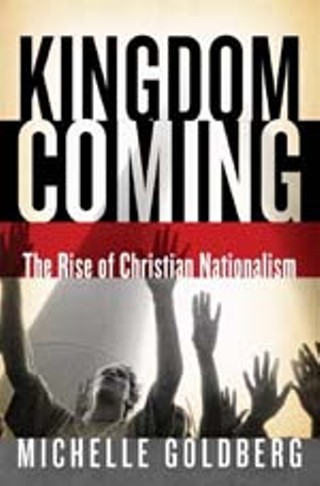 "Christian Nationalist" is the label journalist Michelle Goldberg pins on the large swath of godly conservatives – those who're united by an unshakable belief in a biblically correct world-view to govern state and self alike – driving the ascendant political machine of the right. Others have labeled this strain "dominionism," a blend of biblical literalism and extreme nationalism that, in Goldberg's words, "assert(s) the Christian right to rule." One of its bedrock principles is that the American founders were, despite most evidence to the contrary, committed to governing from a Christian perspective as opposed to, say, forming a state that privileges no faith or creed.

Pretty much all the major culture-war battlefronts are encapsulated in this very readable primer on the burgeoning Christian political movement in the U.S. More interesting, however, is its survey of the various camps that manage to coexist under the big banner of Christian nationalism. The differences between Christian Reconstructionism (if you build the Kingdom, He will come), and Premillennialism (kick back, wait for Rapture), for instance, are formidable even though many outsiders may find them equally bizarre.

The Christian right has been the recipient of much media attention of late for a few simple reasons: despite its schisms, organized evangelicals have become a seriously effective part of the Republican party: the AFL-CIO of the so-called moral-values set. Another part of the media orgy, of which this book is surely part, has to do with the fact that Christian nationalists are ideological exotics. Sounds ridiculous, but think about it: They speak the same language, use the same malls, eat the same food, but, as Goldberg rightly argues, they don't agree with most of America on the fundamental nature of reality.

Unlike so many mainstream pundits – David Brooks and Nicholas Kristof, I'm talking to you – who claim arrogant liberals are out of touch with the Christian common man, and that the prescription is some sort of "Take a Fundie to Work Day," Goldberg has the guts to admit that such dialogue is pointless.

Liberals are often accused of rejecting moral absolutes in favor of a tepid cultural relativism. This world-view, or lack thereof, was challenged on September 11. Many contend the lesson still hasn't sunk in; that the left, to paraphrase Christopher Hitchens, still thinks Karl Rove is more dangerous than al Qaeda. Whether our own mullahs can teach a larger political lesson remains to be seen, but Kingdom Coming could be a good start.

Jeans: A Cultural History of an American Icon
Yes, jeans are iconically American, but however many ways this is restated, it does nothing to quell the question of ... so what?

The Sound of No Hands Clapping
Maybe it's because Americans so instinctively put British folk on a pedestal of erudition, but it's a welcome relief to find one who, however book smart, is a complete social imbecile