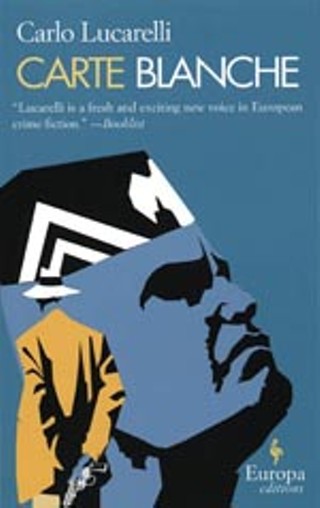 If it was anxious West Coast dystopia that bred American noir, then it was war in Europe that sealed the deal overseas. The exchange, though, ends up roughly the same: When you're helpless, what can you do? When you're confused, who do you call? And what can you say? "'What I'm about to say now,'" maybe, as Carlo Lucarelli's typically moody Commissario De Luca does when asked by his partner how their chief will respond to an investigation into the brutal death of a vascillating fascist upon Allied forces' Northern advance in 1945 Italy. Meanwhile, in real time, he "pulled his badge out from inside his trench coat and opened it before a militiaman who was heading towards them with a menacing look. 'Out of my fucking way, son,' he said. 'This here is none of your business. Just forget it.'" In other words, leave it to fiction: In times like these or those, it's the only escape. Still, despite De Luca's tough talk, he's shown throughout the first installment of his namesake trilogy to be "scared"; often – too often, whether because of Michael Reynolds' otherwise crisp translation or Lucarelli's otherwise clean writing – a "shudder" runs through him. Like other great detectives, he's got insomnia and no appetite. He's got a case rife with dire political implications and conflicts of interest, on top on sex, drugs, dark alleys, and dead ends. He's got a red-haired femme fatale – "witch"-like, she is, with "red-flecked eyes" – who reads palms. He's also got quite a past: The day before the narrative opens, he was transferred from Il Duce's Brigata Ettore Muti; at its opening, when Partisans bomb a Republican funeral, De Luca is symbolically caught in the subsequent crossfire, "on the ground with his face in the dust, his hands open on his head ... He remained like that for an interminable moment." That interminable moment is Carte Blanche – written almost a half-century after it's set (and released here even 20 years later) – clearly an effort to come to grips with an uncomfortable history. Like Europa's other war-boiled jewel of 2006 – Patrick Hamilton's dizzying and disturbing Hangover Square – it's remarkably surefooted as it stumbles around in a haze. A shame it's over so soon, and that its follow-ups, The Damned Season and Via delle Oche, aren't yet available in English. Hurry up and wait, as it were.