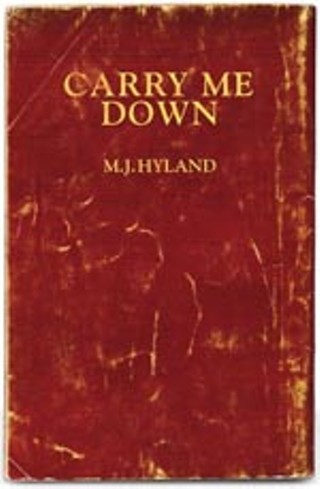 Carry Me Down is the story of John Egan, a strange boy with a strange gift: He can detect lies with his body. According to him, white lies make his ears tingle, bigger lies make him vomit. As the 12-year-old is obsessed with the Guinness World Records, he figures he's got his ticket into the annals of extraordinariness. But is John a reliable narrator, or is he, simply put, a nut job? As he grows to frightening proportions (his mother is constantly worrying about his excessive size), so does his "gift," which he records in his "Gol of Seil." Meanwhile, his family is collapsing around his considerable feet. Set in the small town of Gorey, Ireland, Carry Me Down is not only the story of a boy faced with all the regular (why does he want to lie naked with his friend Brendan during a sleepover?) and irregular tinglings of adolescence, it is the story of addiction, loyalty, silence, and violence – both domestic and institutional. The backdrop of John's remarkable development is a vicious school environment and a domestic situation marked by alcoholism, gambling, and heartbreaking manipulation. All this culminates in a shocking attempted murder that is both unsettling and, to some degree, unsurprising. The real, tragic story, then, is not one of a boy possessing magical powers, but of a boy whose psyche is unraveled by the obtuse, negligent adults in his life.

Hyland's prose is fluid and unassuming, compassionate but detached, and she is able to infuse John's narration with the appropriate degree of wonder, shame, neediness, and confusion of this almost-unhinged naïf. This makes for many discomfiting, plodding moments, but the reader's diligence is repaid in such memorable scenes as when a passionate teacher enacts a delicious comeuppance upon a classroom bully. Like life itself, this novel is largely uncomfortable; the trick is to cherish the transcendent moments.

Carry Me Down, Canongate, M.J. Hyland