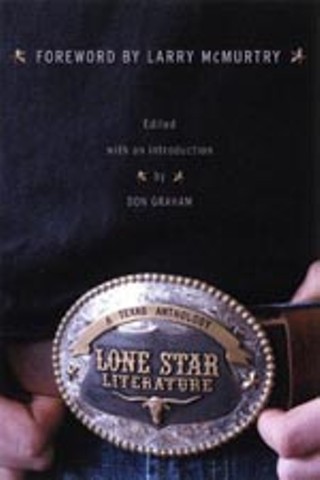 When it comes to getting Texas the respect it deserves in the world of literature, there's probably no one more qualified than Don Graham. A University of Texas creative writing and literature professor, Graham is a native Texan who has written numerous books and stories on Texas culture and personalities. When his anthology, Lone Star Literature, was first released as a hardcover in time for the 2003 Texas Book Festival, it was heralded as diverse, compelling, and comprehensive, and was selected as a Southwest Book of the Year. In introducing the book, Graham points out that, despite the Lone Star State's wealth of talent, many outsiders think of our writers as a host of clichés that "gallop into view." In a December of 2004 story he wrote for The Texas Observer, Graham described how he tried to take The New York Review of Books to task because one of the magazine's writers said that "Texas has a remarkably thin literary résumé."

Rather than dueling with Yankees at dawn, I think we should all consider one of Graham's main points in his Observer article: "If Texans don't celebrate the writing of their native state, nobody else is going to."

This comprehensive and diverse collection of short stories about Texas is quite the celebration. What more can you ask for?: 63 stories by 63 authors from the 19th, 20th, and 21st centuries.

Furthermore, the book is organized by regions of the state – the border, the South, the West, and Town/City – and each story is labeled by the year in which it was released.

Looking for a little commentary on Texas politics? There's O. Henry's "Art and the Bronco" about a cowboy artist dealing with the Texas Legislature of the 1890s. Fast forward to Chapter 1 from Billy Lee Brammer's The Gay Place. Then, take in some laughs from Molly Ivins' "Texas Women: True Grit and All the Rest," not to mention from a little commentary on Texas etiquette by current gubernatorial candidate Kinky Friedman.

You want stories about cowboys and the Southwest? Cowboy writer Andy Adams leads the book with a story written around the turn of the last century called "A Dry Drive," followed by horses and six-shooters in James Emmit McCauley's "Heading for the Setting Sun." Other stories in this genre include an excerpt from John A. Lomax's Adventures of a Ballad Hunter, Walter Prescott Webb's "The Texans Touch the Plains," and an excerpt from Gertrude Beasley's memoir My First Thirty Years, which describes what it was like to grow up in West Texas 80 years ago. And what anthology of Texas literature would be complete without a piece by J. Frank Dobie? His "Bogged Shadows" tells the story of Findlay Simpson, a ranch hand who knew his share of tall tales.

Speaking of writers needed for such an anthology, Lone Star also includes Katherine Anne Porter's 1935 story "The Grave." Those who like to stereotype Texas literature always seem to conveniently forget Porter's Texas roots and how they influenced her career.

Another must – Larry McMurtry – helps round out the selection of stories about the Tex-Mex border. An excerpt from his The Last Picture Show tells of Duane and Sonny's visit to Boys Town. In "The Gulf Oil-Can Santa Claus," Rolando Hinojosa-Smith tells a funny but sad tale about a friend of his who literally welded a bunch of Gulf Oil cans into a Santa Claus. In "Tomorrow We Smile," Naomi Shihab Nye paints a picture of immigrant interpersonal troubles.

Throughout the book are stories that speak to the question, "What does it mean to be a Texan?" Larry L. King talks of being a Texas expatriate in "Playing Cowboy." Stephen Harrigan puts miles and miles of Texas on the odometer of a rental car in "What Texas Means to Me." And Betty Sue Flowers explains the Texas state of mind in "Why Texas Is the Way It Is."

There are even tales of John F. Kennedy's fateful day in Dallas: an excerpt from Edwin Shrake's novel Strange Peaches, Gary Cartwright's "Who Was Jack Ruby?", and Joe Bob Briggs' "How I Solved the Kennedy Assassination."

True, there are some genres that are missing – science fiction comes to mind – and, true, there are other anthologies out there covering varieties of Texas women writers and Texas poetry. As McMurtry writes in the book's foreword, putting together anthologies is not easy: There's too much material, and it has to "fit between the covers of a normal-sized book." Hardly a "remarkably thin" legacy, to be sure, yet one that manages to fit as well as a broken-in pair of Tony Lamas.

Other Recent and Anticipated Texas ...

Part of the Bargain: Poems by Scott Hightower (Copper Canyon, $15)

Riley's Fire: A Novel by Lee Merrill Byrd (Algonquin, May 12)

The Gentle Order of Girls and Boys: Four Stories by Dao Strom (Counterpoint, May 5)

A Girl From Texas: The Life, Loves and Battles of Ruth Conerly, America's Extraordinary Artist by S.E. Wolf (Antigua Odisea, $19.95)