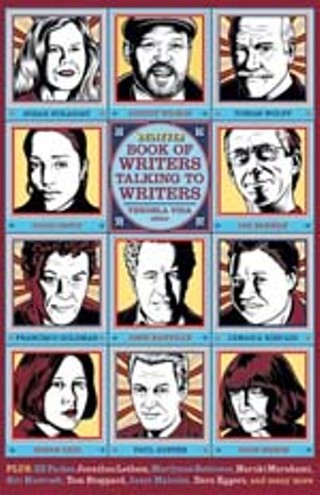 The Believer Book of Writers Talking to Writers

Dedicated readers of The Believer know that in order to get a copy of the latest issue, you need to hightail it over to BookPeople before they all vanish, which is almost always quickly. The excellent, ad-free monthly, published by McSweeney's, focuses primarily on books and authors, and The Believer Book of Writers Talking to Writers is an anthology of one of the publication's best sections for those who've been too late to snap up every issue: the author-author interview. In all cases, the pieces were proposed by authors who were personally interested in their subjects, which results both in conversations plumbing considerably deeper ground than most interviews and in numerous digressions. The fact that we have mostly fiction writers interviewing fiction writers here gives the conversations a familiarity and depth uncommon to the Q&A format. There is often a voyeuristic feel to the interviews, the sense that one is hiding behind a curtain hearing top-secret intellectual secrets one isn't supposed to.

Of course, while there is plenty of profundity to be found, and many of these interviews have interesting things to say about the writing process, let's be honest: This is a book nerd's Gawker. Tobias Wolff guessing Julie Orringer's weight? Zadie Smith falling out of a window while trying to sneak a cigarette? Haruki Murakami's beer preference? Ben Marcus dissing Jonathan Safran Foer again? It's all here, and whether literati gossip sparks your interest is a pretty good indicator of whether this book is for you. Even if so, there are a few caveats. People who've read the magazine since day one might be disappointed by the small amount (only one-third) of new content in the book. Those who've not read the magazine should be aware that these interviews are frequently more interesting when you've read the authors' works, and that spoilers – big ones – abound.