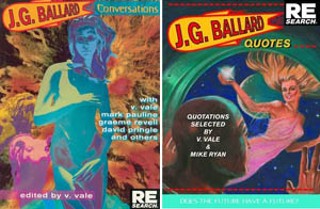 Anyone possessing a twinge of nostalgia for the heady, innocently sex-positive cultural melange of the late 1980s and early Nineties (Foucault! Baudrillard! ACT UP! The Blonde Ambition Tour!) would do well to revisit the work of both British writer J.G. Ballard and his most devoted stateside resuscitator, RE/Search Publications. While Ballard's short stories were first published in 1956 and his first novel (The Drowned World) followed in 1962, it wasn't until the publication of 1984's semiautobiographical novel Empire of the Sun and Steven Spielberg's 1987 film adaptation that he was freed from the (somewhat misapplied) "science fiction" pigeonhole, and then only partially. RE/Search – the rad/punky San Francisco publisher of graphically riveting, encyclopedic studies of what were once fringe activities and avant-garde subjects (Pranks!, Angry Women, Modern Primitives), begun and run by V. Vale in 1980 – was largely responsible for reviving, if not inciting, interest in Ballard's more respresentative work: creepy, futuristic novels and short pieces that served as both cultural critique and weird, cerebral pornography – most notably Crash, High-Rise, and The Atrocity Exhibition, all originally published in the 1970s. RE/Search #8/9: J.G. Ballard (1989) and the publisher's subsequent reprinting of The Atrocity Exhibition were perfect for a generation of edgy eggheads primed to appreciate a drily poetic, disturbing dystopian like Ballard.

While Vale's Ballard obssession shows no sign of abating, his talent for translating arcana is, fortunately, equally healthy. Two new RE/Search publications have gathered a huge hunk of what could have seemed like Ballardian detritus into a surprisingly linear collection, both complemented by the unsettling, surreal-ish photographs throughout. Quotes – contentwise, the slighter of the two – is just that: wit and wisdom culled from years of Ballard's work and interviews, with emphasis on the latter, meant to be consumed in small interludes. Chapter headings hint at the author's fixations ("Sex," "Surrealism," "Pathology and Death," "Swimming Pools"), and the aphoristic clips range from profound to bizarre to both at once ("[Margaret Thatcher] has a very powerful sexual and mythological aura. Like all great leaders, she promises not just a better future, but a more dangerous one!").

Conversations, previously unpublished interviews by Vale, musician Graeme Revelle, Survival Research Laboratories mastermind Mark Pauline, and others, starts creakily – it can at times seem repetitive, and the more recent interviews border on creating the impression we're eavesdropping on two fusty, left-wing conspiracy cranks, overeager to declare the "death" of any number of things (television, utopia, reason, the future) – but ultimately leaves the effect of having witnessed a long, riffy conversation among a group of incredibly intellectually free-ranging, earnest compatriots.

What emerges from both, after a fashion, is not Ballard's predictability, but his prescience: It's easy enough now to speak to the mass psychosis behind the global ascent of fundamentalism, the modern inability to understand reality in any but cinematic terms, or the idea that "people no longer need enemies; their great need is to be victims" (see: 9/11); it's just that Ballard has been pointing these things out since the beginning of his career – and unlike many of the theorists and activists who were his contemporaries, he does so through engaging characterization and epigrammatic wit. An unreconstructed Freudian, Ballard constantly circles the charged sex/death nexus, bringing our complicated relationship with technology irreversibly into the equation. Make no mistake, too, that (perhaps unlike oft-cited contemporary William Burroughs or David Lynch, a director Ballard admires), his cold, often erotic studies are in actuality morality tales, effectively disguised by their nuance and readability – in the end, Ballard's most nostalgia-proof achievement.