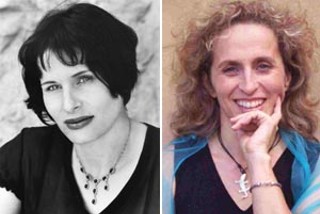 Found in Translation: Writers & Their Translators will take place in the Senate Chamber on Saturday, Oct. 29, 11am. Joining Martínez (l) and Valenzuela are renowned translator Edith Grossman and writer Mayra Montero (Captain of the Sleepers).

This year's Texas Book Festival has expanded to include more Latino-themed books, to be discussed on a number of bilingual and Spanish-language panels. Among these is one on translation, which brings California-based Nina Marie Martínez, author of Caramba! (now out in paperback from Anchor). Set in fictional Lava Landing, a composite of several California farming towns, Caramba! is quickly described as a picaresque novel featuring six characters, each wrestling with life's larger questions through the prism of their everyday lives (or in the case of one character, the challenges of the afterlife). Written with zeal, the narrative percolates thanks to Martínez's ear for the musicality of Spanglish, "twanglish," and other means of expression that cultural nomads will instantly recognize. Caramba! has been admired by reviewers for its inventiveness and humor; at the same time, it's criticized for lacking cohesion (its structure is patterned after Loteria, the Mexican game similar to Bingo). Others have labeled it Latina chick lit. Regardless of this bifurcated response, the novel has earned Martínez readers eager for more.

Now at work on her second novel, Martínez intends to capitalize on this newfound audience. This is where Liliana Valenzuela comes in. The Austin-based writer and translator assumed the task of translating Caramba! into Spanish earlier this year. (Valenzuela's other translations include Sandra Cisneros' Caramelo, Yxta Maya Murray's La Conquista, and, most recently, Denise Chavez's The Last of the Menu Girls). All translators will say there is more to the job than a rendering of words from one language into another. For a book like Caramba!, saturated with diction that is at once idiosyncratic yet familiar, translating had special challenges, as the following phone interview with Martínez and Valenzuela reveals.

Austin Chronicle: Did you know each other prior to working on the translation?

Nina Marie Martínez: I met Lili when I was on my book tour. But before she was offered the job, I'd profiled her like a criminal. Other names had been suggested, but I knew I wanted a Chilango [slang for a Mexico City native] who was living in California or the Southwest.

AC: Why a Chilango?

NMM: Chilangos have a way with words, an appreciation for a turn of phrase that I knew I wanted.

AC: What was the biggest challenge translating this book?

Liliana Valenzuela: Nina's book is so damn funny in English. Not just because of what happens, but in how the characters express themselves. In English, there's a lot of room to use nouns as verbs and verbs as nouns and the use of the double negative. And Nina uses a lot of neologisms. For example, "primperations." Provoking meaning and humor that comes from "primperations" to create the same impact, that's the challenge. Spanish resists neologisms.

AC: But Spanglish is all about neologisms, isn't it?

LV: I consider Tex-Mex or Spanglish to be English-based, although I suppose that's open to debate. I know there is something known as Portañol in those borders between Brazil and Argentina, and Catalan is a mixture of French and Spanish. But once it is defined as Spanish, it's a lot more resistant to change than English. Sort of like what happens with French, where the French academy will defend it to the death, whereas in English, nobody really cares, at least in America. Spain is more willing now to accept this play on words, but I'm still curious to see what the reaction is in Mexico. My feeling is that there are a lot of purists out there, although there's tons of English in Mexican Spanish at this point.

AC: I think it's interesting that Nina learned Spanish as an adult. That made you better able to participate in the translation process?

NMM: Lili did all the heavy lifting. Every once in a while I would suggest a word from a narcocorrido, or a Mexican Cowboy movie, to capture the essence of an idea or a feeling.

LV: Nina had some great ideas I would not have come up with. Like, the paragraph where she describes Javier [Caramba!'s born again Mariachi] in his civilian clothes; she says his clothes gave him a certain "attitude." The direct translation didn't work. The first suggestion was "chingonería," which is close, but Nina had a great moment of inspiration when she suggested "chingonalidad," a neologism of "chingon" and "personalidad."

AC: So, it's good you learned Spanish.

NMM: Well, in some ways it would have been easier if I didn't, because then I would have had no involvement. The other day, I got copies of my book translated into Italian. I looked at [it], but, of course, I couldn't read it. All I could do was wonder how they handled this or that. If the characters sounded the way I wrote them.

AC: But translation is also about capturing the overall music of the writing, right?

LV: Yes. I do at least four drafts, and the last one I read out loud to prove against the ear. If I can't even say a phrase, I know something is wrong.

AC: It must have put you at ease, to know your book was in the hands of someone who cared about your book as if it were her own.

NMM: I trusted Lili. When you work as closely with a writer as I did with her, they become like a member of your family.