'The Cute Manifesto' and 'A Strange Day'

Alternative Comics, helmed by Jeff Mason, intrepid moonlighting lawyer, continues to enrich the landscape of sequential art with its frequent, well-produced editions. Among the latest and the best? James Kochalka's The Cute Manifesto, the square and perfect-bound paperback that gathers, under one cute and spot-varnished cover, eight of the affable cartoonist's meditations on life, love, death, art, and, in part, how all these relate to the comics medium.

Kochalka's come a long way from his days of self-promotion in the pages of last millennium's Factsheet 5. He's successful, now, with his laying-it-bare American Elf diaries online, with his forays into music-video animation ("Monkey vs. Robot"), with the wealth of collected works published by recently defunct Highwater Books. But success, such as it is, has not ruined James Kochalka; rather, it seems to have given him more time to contemplate his place in this complex life and to (as much as he might hate to admit this) perfect his craft. 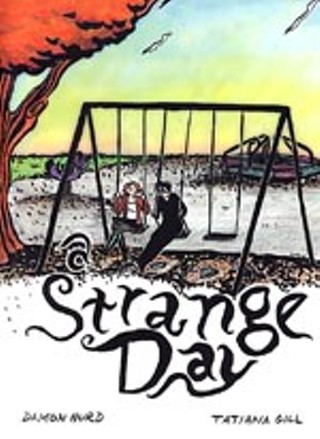 "Craft Is the Enemy," proclaims the opening essay. "Craft Is Not a Friend," reinforces the second, each screed occupying a brief, text-only page before the illustrative goodness begins. Then, just as we're wondering whether we disagree with the assertion or merely have a problem with the artist's definitions, up comes the first graphic piece, called "Sunburn," and we're carried away by Kochalka's deft ruminations on, well, on the miracle of existence itself.

Yes: miracle. This man Kochalka – a sort of younger, sweeter, almost Dakin iteration of famed grouser Harvey Pekar – is besotted with the "joy and beauty in this world so profound that it cannot be diminished by any ugliness or evil." His infatuation with life is effectively communicated through his comics, through sequential drawings that are the kind of simple called deceptive. And yes: deceptive. Just a few lines delineate Kochalka's cartoon world in panel after panel, yet those lines and their arrangements are so well chosen and establish, over many pages, such a compelling rhythm as to carry their creator's message where other, more detailed attempts might fail.

Ruminations, we've called the works collected in this smart volume. Fitting, because it would take a whole Nation of Rumis, probably, to match what the enlightened elfin goofball Kochalka accomplishes here.

A Strange Day is a much smaller, less ambitious effort from the team of Damon Hurd and Tatiana Gill. It is, however, by no means a less valuable work, unless you see little value in well-told, well-drawn stories of friendship and bonding among those less than geezerly.

Two teenagers, Miles and Anna, skip school to await the release of the latest Cure album. They've never met before, but their paths cross at the local record store – which isn't even open – and their day progresses together from that point, through a series of dialogues and monologues that will strike a warming note of familiarity in anyone who's ever hung out with a new friend, yammering the hours away over coffee in a favorite diner's booth. It's a bit like a two-person Breakfast Club for the early Noughts, beautifully evoked by Hurd's words and Gill's skills with brush and ink, expertly captured in black and white and shades of gray and suffused with several colors of love. This is the sort of book you reread to help brush away the blues, the sort of book you might loan to someone you've recently met – especially if the thought of sharing it with them makes your heart beat a little faster.