Although Santa Cruz, Calif., was where she lived and worked the last years of her life, Gloria Evangelina Anzaldúa (1942-2004) wanted her intellectual legacy to live on in her native Texas 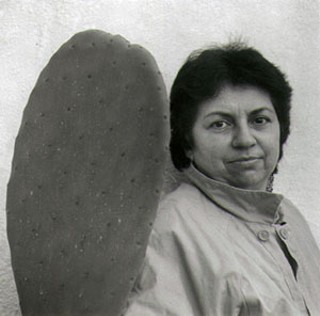 Although Santa Cruz, Calif., was where she lived and worked the last years of her life, Gloria Evangelina Anzaldúa (1942–2004) wanted her intellectual legacy to live on in her native Texas. She got her wish when the University of Texas at Austin acquired the archives of the notable Chicana scholar, writer, and cultural theorist, as announced last week. Anzaldúa's archives will become part of the Nettie Lee Benson Latin American Collection.

Anzaldúa's work theorizing identity has profoundly influenced feminist, ethnic, gender, and lesbian studies scholars, among many others. Her pivotal 1980 book, Borderlands/La Frontera, is still widely read in U.S. universities and around the world. When she passed away in May 2004 from complications of diabetes at age 61, the response was swift and heartfelt. In Austin, a symposium coordinated by university and community women celebrated Anzaldúa's life and work in October of 2004.

"It's a well-rounded archive," says Christian Kelleher, the archivist for the Benson Latin American Collection who traveled to Santa Cruz to collect the materials. Besides the expected correspondence and draft copies of her books and notes, there are also audio and video recordings of Anzaldúa, posters and T-shirts commemorating Chicana feminist events she appeared at, and her artwork. Rare photographs of several altars Anzaldúa had in her home are also included, Kelleher says.

Anzaldúa received her master's degree in English from UT-Austin in 1972. The Anzaldúa archives are expected to be accessible by fall 2006.