Splendor in the Short Grass: The Grover Lewis Reader 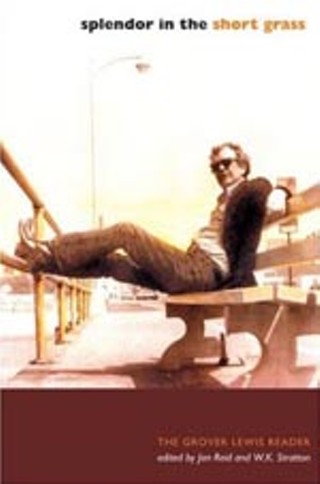 Splendor in the Short Grass: The Grover Lewis Reader

That would be Grover Lewis, the best Texas writer you've never heard of. The words loom up in a series of 11 magazine pieces, several unfinished essays, and other ephemera collected to memorialize Lewis, a founding member of the New Journalism who died of lung cancer in 1995 at the age of 60. Lewis was a type, a familiar one: a skinny neurotic with Coke-bottle glasses and cowboy boots who worshiped the right kind of pop figures (Lightning Hopkins, Robert Mitchum, Sam Peckinpah) and sneered at the rest. His sneer came natural by virtue of a backstory of Greek-tragedy proportions. When Lewis was 8, his dad fired five bullets into his mom in a boarding house bathroom in downtown San Antonio. According to the police report, Lewis' mom then picked up the dropped revolver and put the last bullet behind his father's left eye.

This event and subsequent maltreatment at the hands of indifferent or abusive caregivers seem to have prejudiced Lewis against rednecks and Texas generally. Likely, it had something to do with the writing obsession that appeared in his teenage years. And while it certainly contributed a post-hip, post-nihilist, sick-of-it-all air to his prose, the other side of loss is there, too: the shocking energy and detail of one who is most assuredly not dead.

Check out the first sentence from "Sam Peckinpah in Mexico," published in Rolling Stone in 1972: "Limping delicately as if his boots are a couple of sizes too tight, so rockinghorse loaded on Juarez tequila he'd flunk a knee-walking test, Roy Jenson, one of the neo-Wild Bunch of characters and character actors that Sam Peckinpah has flushed out of the Hollywood woodwork to play the cutthroat band of thieves in his ultraviolent new thriller The Getaway, lurches against a red light into the rushing cabal of noonday traffic at Oregon and Missouri Avenue, a stone's throw away from the Holiday Inn–Downtown [El Paso], where most of the film's location troupe is quartered."

Throughout these pieces you read words like those in the lead that you've never seen before, words that aren't even in Webster's, used in contexts so comfortable as to render their meanings obvious. You see turns of phrase that could stand in for verse: "shiny-suited shamans with faces like sprung mousetraps," "the shards and traceries of our forebears trapped in the stop-time aspic of old hillbilly records," "a trash band playing moldy show tunes to scattered bursts of apathy."

Lewis was over 30 when he finally started living his dream of writing for a living. And while he worked for many big magazines, his talent and innovation didn't make him a star. The high point of his career came in the early Seventies, when he created the set-location and on-tour coverage for Rolling Stone, when it was more New Yorker than People. Eventually he and Jann Wenner fell out, and Wenner removed Lewis from the official history of the magazine. Gradually the writer wrote less, drank more, and for a time stopped publishing altogether. But in the early Nineties Robert Draper, then a Texas Monthly editor, looked him up and booked him for a piece on the crumbling section of south Dallas called Oak Cliff, where Lewis had lived his teenage years.

Draper, in the remembrance that concludes Short Grass, asks, "How good a writer was Grover Lewis?" He stitches together some quotes and comes up with: maybe the most talented of his supremely talented peers. More talented than the Texas writers like Larry McMurtry, his best friend in college, or Billy Lee Brammer, his buddy from Oak Cliff. More talented than the writers he worked with at Rolling Stone, Hunter Thompson, Joe Eszterhas, So, yeah, Draper sells it.

But a third of the way through the piece Draper commissioned, "Farewell to Cracker Eden," it's quite believable. The further the piece strays from the reportorial list-making of decayed schoolhouses and abandoned neighborhoods to memories of bedrooms, movie theatres, bullies, friends, lovers, the sharper and more personal the details become. It reads like brittle notebooks bursting into flame. The notebooks with the memories.