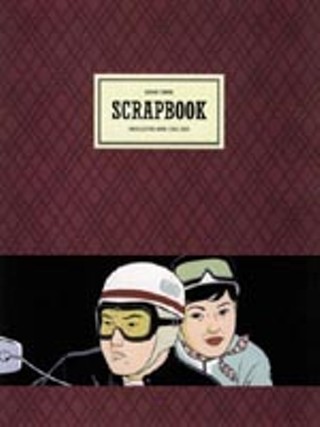 Adrian Tomine will be at BookPeople on Tuesday, June 15, 7pm.

Maybe you're familiar with Adrian Tomine's Optic Nerve series of comic books from Drawn & Quarterly, and that's why you're reading this. Because you're already aware of the subtle brilliance of his narratives ("Tomine gets loneliness and disconnection down pitch-perfect," says the Los Angeles Times) and the deft precision of his draftsmanship ("I might as well chop my fucking hands off right now," say several envious cartoonists), and you're wondering if this Scrapbook collection is equally worth your while.

Because it contains almost everything Tomine's done outside Optic Nerve since he was 17 – including the complete run of his comics for Tower Records' Pulse! magazine; illustrations for The New Yorker, Esquire, other magazines and bands and movies; previously unpublished "out-takes" from early issues of Optic Nerve; and a fine selection of pages from his sketchbooks.

All this "represents my hobbies, my diversions, my day jobs," says Tomine in his brief introduction. These representatives, then, are beautifully reproduced in color or in crisp black-and-white, and all 205 pages' worth of them on the kind of thick, smooth paper you might want to have the story of your life printed on. There's also a Notes, listing where the works were originally published and what comments Tomine has about them. And the book has, check this out, rounded corners.

Drawn & Quarterly's Chris Oliveros has a widely appreciated history – going on 15 years – of issuing work by some of the best cartoonists in the world in regular ongoing comicbook format, or – especially in the case of the D&Q annual anthologies – in perfect-bound volumes equal to the quality of the artists' content. And now there are these single-artist collections of non-narrative work. In fact, having released Chris Ware's Acme Novelty Datebook last year, Oliveros' publication of Tomine's Scrapbook might have been the only follow-up that wouldn't be anticlimactic.

But maybe you aren't familiar with Tomine's Optic Nerve and don't already know how his stories are like the best literary short stories you could ever find – as if the oeuvres of J.D. Salinger and Shirley Jackson, say, were modernly extended – but are also drawn, in panels so masterful that a careful reading of them renders parts of Scott McCloud's seminal Understanding Comics redundant. In which case, you should probably forego purchasing Scrapbook. Until you've had a chance to read Summer Blonde, the latest Optic Nerve collection, also available from Drawn & Quarterly. But, after that, you'll likely want to possess a copy of everything the man's produced, and so will wind up snagging Scrapbook after all.

For anyone who appreciates the intersection of narrative and graphic excellence, it's not so much a matter of if as of when. And supplies, you know, are running out.