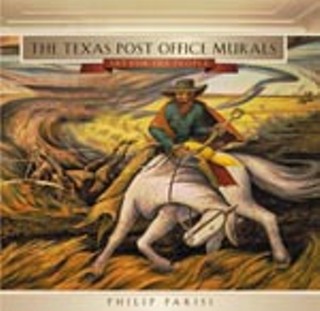 The Texas Post Office Murals: Art for the People

Indians, settlers, cowboys, oil field roughnecks, slaves, and migrant workers silently stare down at the bustling lobbies of 61 post offices around Texas. Most of the customers who come to the counter to buy stamps don't pay much attention to the mural on the wall above them. Finally, someone has given the frozen faces of the Depression-era images a voice. The Texas Post Office Murals bridges the gap between coffee table art book and travel guide and fills a void in regional art scholarship. The book's four-color reproductions bring the wall-size paintings down to the reader's lap, where the creative works can be studied and admired. The stories that accompany the pictures give even the faded works new life, and a map in the back of the book makes it easy to find the towns with post office murals. To complete the history lesson, Parisi even tracked down photographs of the paintings that no longer exist or are not available to the public.

A former editor for the Texas Historical Commission and now an instructor at Utah State University, Parisi began his research of the murals in 1989, when he found a collection of 35mm slides in a THC filing cabinet. His book marks the first time that all of the Texas paintings have been assembled in one place for public viewing. The installments became instant attractions in parts of the state where residents had few opportunities to view fine art up close. Although the project as a whole was well received, predictably, the reactions were varied. After seeing the mural at the Edinburg post office, a bow-legged cowboy is reported to have said, "Wal, now, that's not bad 'tall." On the other hand, the postmaster in El Campo complained of the picture installed above his office door, "We got a combination of trees from Maine, with agriculture from Kansas." 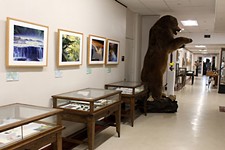