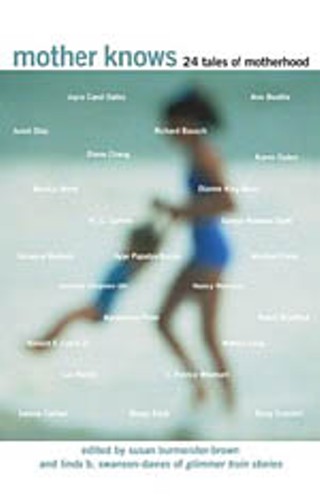 In this season of Hallmark platitudes, it's good to remember that motherhood is a continuum of pain. Mother Knows, a collection of short stories about mothers and motherhood from the literary quarterly Glimmer Train, salutes without condescension the wisdom that springs from creating and fostering life. Sometimes, we learn, wisdom is hard-won.

The stories appeal to the heart and mind, and the collection is comprehensive in scope – topically, culturally, and aesthetically. There are aging mothers; sick mothers who shit the floor like babies; immigrant mothers who abide desperately in snowbound New York slums, frying lime and cilantro to recall Havana; absent mothers; mothers who watch their parents dying or slip quietly into death themselves; young children; grown children; grandchildren; lost children.

One of the best selections, George Makana Clark's "Backmilk," begins when a neonate's nose snags on its mother's cervix, leading to 13 hours of back labor. With simple imagery and an arch, matter-of-fact tone – the baby is the narrator – "Backmilk" evokes the intractable pull between mother and child. But like all the selections, Clark's builds upon this truth, connecting the phenomenon of motherhood with the world around it – lives lost and gained, wars waged, dreams deferred. In Clark's case, the mother is an African servant in imperial Rhodesia, the child not her own. The nursling's father means to asphyxiate him with a pillow because he looks too much like his Xhosa great-grandmother, betraying their putatively white ancestry.

Heavy-hitters like Joyce Carol Oates ("The Missing Person," also featured in her collection Will You Always Love Me?) and Ann Beattie ("Solitude") examine conflicted multigenerational relationships. Still, the best surprises are the stories from lesser-known authors. In Karen Outen's "What's Left Behind," an expectant mother survives fatal floodwaters and returns to the warped embrace of an old lover, himself an accident survivor. Jennifer Seoyuen Oh, a recent Duke graduate, impresses with "January," a simply written narrative about a mother and child escaping the Korean War. Margo Rabb's "How to Find Love" is a lighter, semicomic piece from a young-adult perspective, but it also stings with adolescent truth.

Two Austin-based writers, Dianne King Akers and Robin Bradford, are included in the compilation. Akers' "Small Speaking Parts" is an early highlight. Economically written but replete with resonant imagery, "Small Speaking Parts" chronicles a reunion between a mother and her aging father, now debilitated by a stroke, and gets all the details right – her son's fear of losing his teeth, her father's attempts to string Scrabble tiles together, and her own struggle to keep her cool in "the wild young grieving place that says I love you, I hate you, don't leave me, I'll die." Bradford's "Bob Marley Is Dead" captures the fearsome ecstasy of mothering an infant, while her narrator contends with a new set of sudden changes. "[E]ven on the worst days," she thinks of her child, "his feet are as soft as flower petals, having never yet been walked upon."