The B-Boys of Beaumont 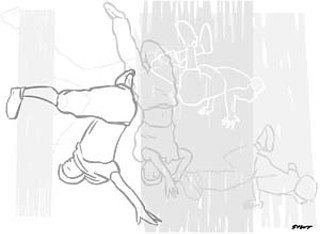 The business ward had lots of tall buildings but they were all kind of old and crumbling. And before we could even make it to the spot downtown a hard rain was hitting the city. Rain was a good thing that summer since it helped to keep things cool. It was me and Trick T leading and Big Vance following behind, like he usually does. Vance is big like his name says and not too fast, but he's got power and always got a few crazy moves up his sleeve. Trick is a natural b-boy, straight up, no two ways about it. Breaking didn't come natural to me like it did to Trick. I had to work hard for every move except maybe backspinning and the caterpillar, but they're so old school and simple nobody can really count them as moves these days.

When we passed by Kyle's Five and Dime the rain was still coming but the sky was starting to look like the sun might peek out. On one side of Kyle's you could still see the Krush Krew tag put up by Ruina like two years back when we first crewed up. "Krush Krew for Life" is what the yellow tag read, but Ruina's style was so his that even heads couldn't hardly read it, let alone the regular people in the city. But even if the tag said what it did, Ruina was out in Cali on a trick-bike sponsorship. Couldn't hardly even get him on the phone anymore.

So instead of the old four-man Krush Krew it was down to me, Trick, and Vance. The plan was to get set up outside the Jefferson Theater and put on a show. Most everybody would stop and sneak a look, even the old business guys. If some people felt like putting some change on the sidewalk we never stopped them, but that's not how the police saw things. And if it wasn't panhandling, they could get us for disturbing the peace, even if Vance never pushed the box past five on the volume dial. The rain had come to a drizzle so Vance took the garbage bag off and set the box on the ground.

Vance always talked too loud, even when he was being nice. Vance looked at me and Trick and was like, "Are y'all down?"

Trick was all, "Why you gotta ask?"

That was just like the two of them, since Vance was Mr. Polite unless you pushed him to the wall – then you had to watch out because you couldn't guess what Vance might do if things got hyped. With Trick it was almost just the opposite. When things were chill, Trick would try and speed things up. But when things got hyped he'd keep cool under the stress. I guess it all kind of balanced out somewhere.

Vance pressed play on the box. A screwed-up beat kicked in and Trick hit the ground. Right away everyone who was walking by came to a stop. Me, I like to uprock a little before I hit the ground, but not Trick. He always gets right into it. He threaded around like a pretzel, then busted out a vertical pushup and you could hear the people in the crowd breathe in together all at once.

Trick's legs slashed around and almost hit some gray-haired guy wearing a suit, but Trick never hit anything or anyone unless he meant to. Most of the crowd sort of laughed and the old guy walked away quick, like he was mad about it, even though Trick was just having a good time and not trying to make anyone feel bad.

Trick got up and was like, "Hit it, Kid." But I figured Vance was the one who'd brought the box so I motioned for him to go next. Big V got into some crazy locking and popping. What Vance didn't have in style and timing he always made up for in power and letting it all hang loose. And when it came down to it, going all out and acting the fool was almost as good as being in full control. Plus it always cracked people up. Vance did some of his jelly belly rolls and had me and everybody laughing so hard that by the time he was done and I was up, I was almost out of breath.

But I did my best to concentrate and get my head clear so I could put my focus on what I was doing. As soon as I got into some uprock I could feel that good feeling take over and pretty soon it was only moves and colors and the beat. I dropped and busted out a coffee grinder, then flipped over for a few crickets. The crowd was eating it up like it was peach ice cream, which it really wasn't. But the happiness and adrenaline kicked in even more and made me try for a windmill.

I tried, but didn't get much past my left shoulder before I landed flat on my back. Not even one rotation, let alone a windmill that really spins. I threw out a freeze to make the crowd think I had tried to land flat on my back like that, but I probably only fooled maybe half the people watching, if that.

Before I could even stand I saw Vance reach for the box and shout "Police." I don't even remember getting up, just me and Trick and Vance running down Fannin Street and ducking into a tiny little alley. The police car couldn't even squeeze into it. The cop riding shotgun rolled down his window and shouted, "Go back where you came from." Nobody got out of the car, so about halfway down the alley we stopped running. I figured most police don't like it when they see us kind of kids having a better time than they probably ever had.

We knew how things were. And whenever we went to break downtown, we never parked our bikes near the dance spot. Walking back past Kyle's Five and Dime the sun was looking about ready to set. It made the yellow "Krush Krew for Life" tag glow orange. "For Life" ... yeah, right – then where was Ruina? It hit me just then that words and names don't always mean what they say they do, even if people meant them when they used them. And how just like me and Trick and Big Vance had nicknames, so did the area around Beaumont. They started calling it Spindletop like a hundred years ago when they went digging for oil and it came shooting up so high and strong out of the ground they couldn't stop it.

By the time we got rolling on our bikes the sun was hitting the water. And even all the oil refineries, broken down mills, and rusted out factories had a natural glow to them. Times like that made Beaumont seem pretty. And I remembered some substitute teacher who told the class that Beaumont stood for "pretty" in Cajun. My guess was that whoever the Cajun was that named Beaumont must have been looking at a sunset, about like the one me and Trick and Vance were looking at. And I tried to imagine how things might have looked like if they never dug so deep into the ground that it changed the name of the place.