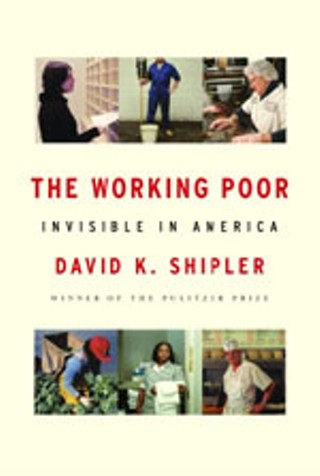 The Working Poor: Invisible in America

As I write this, NPR is replaying LBJ's 1964 State of the Union speech, in which he announced the war on poverty in that hayseed preacher's voice of his. Heritage Foundation, a think tank close to the heart of the administration, has chosen to celebrate the occasion by issuing a report on the state of the poor in America. According to the Heritage Foundation, the American poor are doing great. They have VCRs. They have housing. They have cars. They have M&M's. Their lifestyles compare favorably to, say, the nomads of northern Ethiopia.

The report rather neglects health care, dentistry, education, the general make of the cars, the kind of the housing, the general shape of the opportunities, lead poisoning, child mortality, and all the piddling, life-or-death issues that form the pith of Shipler's book.

Shipler, an ex-New York Times man, wants to show how the working poor live before moving on to the question of why they are poor. Not surprisingly, it turns out that causes can't be separated from effects. As Shipler puts it:

"Every problem magnifies the impact of the others, and all are so tightly interlocked that one reversal can produce a chain reaction with results far distant from the original cause. A run-down apartment can exacerbate a child's asthma, which leads to a call for an ambulance, which generates a medical bill that cannot be paid, which ruins a credit record, which hikes the interest rate on an auto loan, which forces the purchase of an unreliable used car, which jeopardizes a mother's punctuality at work, which limits her promotions and earning capacity, which confines her to poor housing." Shipler went out in the prosperous late Nineties and prospected for interviews among the some 60 million people who live at or near the poverty line (which is, of course, a cruel joke: The government defines it as $18,307 for a family of three -- you do the math).

The first part of the book is a concatenation of their stories, mixed in with the comments of social-welfare workers Shipler also interviewed. These stories put flesh and blood on Shipler's "interlocking factors": The toothless woman at Wal-Mart, whose struggle to keep her clubfooted, retarded daughter from harm (after she discovered that the girl had been raped by her ex-husband) is a mini-epic of government cruelty. (At one point, the state, after forcing the woman to get a job in order to comply with the Worker Responsibility Act of 1998, threatens to take the girl away for neglect: The only job the woman can find that will feed the two is working the night shift at a factory job, but that leaves her 14-year-old alone at night.) Or how about the girl whose first rape, at 14, resulted in a stillbirth that resulted in depression that resulted in her dropping out of her subpar school in D.C. that resulted in the ephemeral prosperity of crack merchandizing that resulted in living on the street. The latter is actually a happy story -- she pulls herself together; she goes through a job-training program; she gets a job with Xerox. Fates vary, but the press of circumstances doesn't. The sheer, insurmountable numbers involved make the poor, as Shipler points out, think as much about money as investment bankers do. What the Furies were to the Greeks, a bad credit rating is to the poor.

In the latter chapters, Shipler abandons his narratives. This is a mistake. By writing essentially Times-ish think pieces in the chapters on health and education, quoting a mishmash of experts and striving for "balance," the energy and interest go out of the book. His final chapter expires in a susurrus of moderation, as Shipler ends with a plea for a national dialogue about poverty that isn't divided between liberals and conservatives, because "the troubles of the working poor will not be relieved by this ideological debate." This is the usual maddeningly centrist hogwash, grounded in a very liberal misunderstanding of conservatism. Liberals imagine both sides are for the ideal of abolishing poverty. They aren't. Conservatives have always been very clear that poverty serves as a moral discipline, without which the moral order of society is threatened. A reserve army of "failure" is as necessary to conservative ideology as an elite of successes.

So, throw away the last chapter and come up with your own radical recipes. Myself, I think Shipler's unease with unionism blinds him to the obvious solution -- workers, consumers, and environmental groups allying to tear down "right to labor" laws; pressuring, with strikes and boycotts, corporations for higher wages; marching for universal health care; and generally instilling a militant attitude to countervail the current managerial headlock on the American soul. One of the unexpected results of globalization is that imports pretty much negate inflationary pressure. This means our current prez can manufacture a fiscal policy that looks like it was conceived in a drunk tank and the markets don't raise an eyebrow. It also means that wage increases will have to be squeezed out of the spoils of upper management if companies want to remain competitive. It is a propitious moment. As the sansculottes used to say in the streets of Paris in 1793, Aux armes, citoyens!