Get on the Ground!

Bett Williams promotes her new book, The Wrestling Party, with, of course, a wrestling party at BookPeople on Friday.

Ladies in these parts are no strangers to the wrestling party (Battle of the Bulls, haaayyy!), but it's a pretty sure bet no one's ever oil wrestled, at least publicly, in BookPeople before.

That, friends, is about to change.

"I'm doing wrestling for the book-release parties just for fun, because there's really no relationship between wrestling, necessarily, and the book," says Girl Walking Backwards author Bett Williams, who'll be reading and wrestling all (or maybe most) comers Friday to promote her new work, The Wrestling Party. Another thing to know: The Wrestling Party is not a memoir. "I don't think I'm interesting or have anything particularly funny to say other than that my stories work well in telling a story about culture," Williams says. "I'm trying to tell a vernacular story that people can identify with ... but the book always ends up being about the community and about the audience."

Whatever category it resides in, The Wrestling Party is 194 pages of crisp, finely punch-lined prose that cuts through the dense ideological clouds surrounding much modern lesbian/feminist groupthink, a sustained and successful retelling of the most personal possible odyssey of contemporary cultural thinking -- all gussied up in trash disco nights, Vicodin benders, and other gleeful acts of unapologetic hedonism. In it, we variously find Williams: at age 16, bewildered and compelled by a manipulative older New Age therapist; having a barely legal affair herself at age 30; obsessing on My So-Called Life; unlaid and bristling at Ladyfest; and finally in Santa Fe, N.M., where she becomes fixated on a Swiss-German submissive for whom, in an intensely personal gesture, she hosts a very public oil-wrestling party.

In the process of accounting, Williams lays herself -- and much of what she refers to as "underground culture" -- bare, with affection and an unblinking eye. "You can only critique what you truly love," she says. "People who believe in identity politics and ... second-year college women's studies students are, like ... my people! I love them, and I love the culture to an extent. And when there are things that are maddening about it, I want to talk about them. The critique of contemporary feminism and identity politics is done in the spirit of dialogue, and wrestling can be a metaphor for that. I mean, you're out there, and you're wrestling each other around, but we're still friends."

Nevertheless. There is the matter of the Real Sex documentary segment, directed by Austin filmmaker Ellen Spiro and aired on the HBO show in January 2002. It reads like a hipster stag film, a well-produced one, with actual athletic competition and a bit of European absurdist theatre thrown in. "Real Sex apparently demanded that Penthouse aesthetic," Williams explains. "Because the oil wrestling is not a sexy thing at all for us. When you have a crush on somebody, the idea of wrestling them is ... exciting, but when you're actually doing it, it's really hard to stay turned on. It's like keeping a hard-on while you're playing soccer. ... And they edited out all the hot butch fat girls."

She's hedging about the eroticism, as both text and video attest to an event of undeniable hotness. I'm sure she has her reasons, but in truth Williams is at her best when she's navigating messy physicality. "Our brains, with their attachment to narrative, hungered to catch up to our bodies, whose experience rather than stories was etched in adrenaline and cuts and scratches," she writes of the day after the first wrestling party. "I took a perverse satisfaction in the injuries of friends. I imagined that the acid oozing from the striae of their muscles, the blood cells of bruises rising up, a fucked-up leg, a twisted neck, a black eye, and a slashed-up knee were my doomed longing for Annika written on their bodies."

Maybe it's not so much about the wrestling. Still, bring a towel.

Bett Williams will read upstairs at BookPeople (603 N. Lamar) on Friday, Jan. 16, at 7pm, along with The Book of Man author Barry Graham. There will be oil wrestling after, if a mat has been located. For more information, call 853-9757 or visit www.bookpeople.com or www.thewrestlingparty.com. 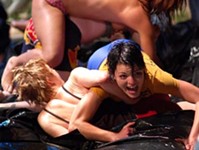 OilBash
Literate, greasy ladies throw down on the Eastside