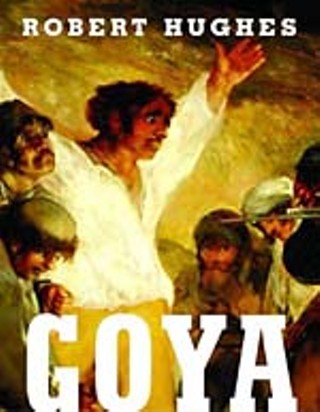 This spring, a Spanish expert in 18th-century furniture made the headlines by claiming that Goya's so-called "Black Paintings" were fakes, painted by his son Javier. This is rather like hearing that Kafka's The Trial was written by his father or that Beethoven's nephew whistled up Symphony No. 9. It turns out that the evidence is, to say the least, inconclusive: There are the expected gaps in the record of the paintings; a contemporary document that refers to the paintings contains some arguably anachronistic furniture terms; finally, the expert cast serious doubt on the legend of the paintings' placement in Goya's house in Madrid. There went one of my favorite myths -- that Goya, deaf and misanthropic, dined with his mistress nightly under the painting Saturn Devouring His Children.

In the end, though, the authenticity of these paintings is invincibly borne on their surfaces. No unknown son painted the Saturn or the Dog or the Duel With Clubs. We can feel the figure behind those paintings, and we know what he looked like, at least a decade before he painted them, from one of the most famous of all self-portraits. There he is, with the bemused face of a retired pugilist, his head cocked to one side. To quote Robert Hughes' description in this biography: "his head is like a cannonball of flesh and bone, lightly filmed, one senses, with the sweat of concentration. He is a man at work, not a court painter displaying his official position. You cannot imagine Velasquez, one of the most dedicated snobs that ever touched a brush, depicting himself in this way."

Hughes' description of Goya is tinged, unconsciously, with the image he himself presents to the public: the art critic as macho, for whom the acuteness of response to the occasions of sensibility becomes one of the fine tests of masculinity. It is as though connoisseurship required a kind of battlefield courage. In Hughes' case, this tendency of his character has recently been exacerbated by a series of well-publicized tragedies, most notably a car wreck that left the author, in his own words, "crushed like a toad." Hughes' vigorous, meaty sense of art -- as though one must wrestle with its emanations like some character in Blake -- is what gives his descriptions of painting such resonance. Who else would remark, for instance, about Goya's famous Naked Maja painting that "her level gaze, which both entices and sizes up the (male) viewer, has filled more than one art critic ... with feelings of inadequacy verging on alarm."

If Hughes projects his own sense of self onto Goya, it is partly because there is an aspect of Goya's artistic persona that is just as performatively virile. There is a rumor that Goya was an amateur bullfighter; he certainly painted a self-portrait of himself wearing a torero's jacket. His painting of a nude woman was unique in 18th-century Spain. He loved sexual innuendo, as one can see from the titles of the separate etchings in the "Caprichos." For instance, plate 17, Bien tirada está (It Is Well Stretched), shows a young woman putting a stocking on a long, curvaceous leg while one of Goya's haggish procurers looks on. We know what is going to be stretched here, and soon.

Goya was born to the obscure family of a gilder and rose, by hard work, through the ranks of the painters. He worked for years making paintings for the Royal Tapestry factory -- a process that taught him much about the depth and surface, about how an economy of brushwork can create a maximum of pictorial tension. In the 1790s he came into his own as the king's official painter. In that capacity, he painted devastating group portraits of Carlos IV's court, exhibiting every receding chin, imbecilic stare, and wrinkled face. By this time, Goya, due to a mysterious illness, had gone deaf. That sense of a man painting from within some dark autarkic box becomes increasingly evident in his work. In the Napoleonic Wars that engulfed the Iberian Peninsula from 1808 to 1814, he found multitudinous confirmation for his misanthropy. But he was too much a man of appetites, too painterly, not to recognize the value, both sensual and moral, of a gesture. The French soldiery executing the rebels in his great painting The Third of May, 1808 are faceless automatons with weapons, literally senseless. It is the humanity of the central figure, with his yellow trousers, his frazzled black hair, his dark skin, scary eyes, and his outthrust arms that we remember. This figure is something new in Western history -- although what was new about him could not be explained by Goya. Marx explained it, though. He explained it exactly 40 years later.

While it doesn't scale the heights of Hughes' Barcelona, with its eccentric erudition, nor is it propelled along with the poppy jauntiness of Shock of the New, Hughes' biography is erudite, knowing, and -- by a coincidence of circumstances -- entirely timely. After all, Goya's Los Desastres de la Guerra (Disasters of the War) could have almost been etched about our own ongoing adventure in Baghdad and Fallujah.