Austin writer Jim Lewis on how things came together in his new novel, and on his current assignment in the Congo 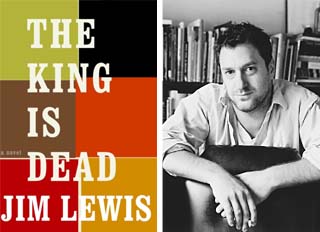 Interviewing writers is usually a placid kind of business. There's the risk of hangover if your prey insists on making a night of it, and there's always the risk of nasty feedback if they don't like how you wrote what they said. However, there's nothing to make the actuarial table jump. Perhaps it is a sign of the times that Jim Lewis is the first author I've ever interviewed in a combat zone.

Not that The Austin Chronicle sprang to send yours truly parachuting into tracer fire -- rather, it turns out that Lewis is dodging around the Congo bush during the week that Knopf is publishing his new novel, The King Is Dead. I e-mailed him asking how the communication facilities were out there, thinking I'd risk a phone call, and he e-mailed back that the French shot off a bunch of artillery the night before and knocked out all the landlines, and the satellite phone costs about $7 a minute. I may try to answer by e-mail if that's OK with you.

Lewis is not only a novelist, but an art critic, a freelance journalist, and a screenwriter. He wrote the Kids screenplay with Larry Clark -- a movie that created some commotion in the Nineties. He is the author of two previous novels, Sister and Why the Tree Loves the Ax. He has taught philosophy at Columbia University. His new novel is, in some ways, a refreshing throwback to the old baroque school of Southern writing, but with the difference that the fatalism, to which novelists like Faulkner and even Cormac McCarthy were as addicted as they were to whiskey, is absent. In other words, Lewis accepts contingency and the advance of time and civil rights. The novel connects two stories. In one, a speechwriter for the governor of Tennessee, back in the dying days of Jim Crow, commits a crime that destroys his family; in the other, an actor, Frank Cartwright, searches for his real parents. The second story is set in the present.

But of course, The Austin Chronicle's first question to Lewis is what the hell he is doing in the Congo.

Jim Lewis: The Congo assignment was more or less fortuitous; I went to Egypt for GQ in July, and when I got back and filed, they asked me where I wanted to go next. I said I wanted to go to Congo to cover the civil war and child soldiers in particular, and they pretty much just said, "Great, go. Give us 6,000 words," and sent me off. I wasn't planning on doing this when the book came out -- but it's good timing for me, because otherwise I'd be sitting around feeling useless.

AC: From what you read, the African situation seems pretty hopeless. What do you think?

JL: Is Congo hopeless? I don't think any situation is utterly hopeless, but it's pretty fucking bad right now. The civilian population is being butchered outright, by the tens of thousands, and others are dying of various diseases. There are six militias fighting for control of this town, Bunia, and it's terrible to see. Much of Africa, so far as I can tell, has been waiting for an even break from the West and from their own leaders for some time. They haven't gotten it yet, but let's hope they will some day.

AC: You've been a part of the NYC scene. Why the shift to Texas? Surely for a man who has been an art critic, Austin must be, in some ways, a distant outpost.

JL: I've been coming down to Austin for various lengths of time, from a few weeks to eight months, for the last 17 years or so, and I have a lot of friends down there. I was pretty much done writing about art anyway: I had said most of what I wanted to say, so I didn't need to be in New York anymore. I'm happy in Austin.

AC: In your novel, miscegenation, race, music, and Memphis all seem to come together. So, do you see Memphis as a cultural epicenter for issues of both race and popular culture?

JL: Briefly (things are a little hairy around here): My point about the miscegenation was really about how little it ultimately mattered. It would, of course, take some time to really get into how race works in America, but in TKID, the issue of race as a genetic fact, as opposed to a social one, is sort of a red herring.

On the other hand, yes, Memphis does seem to me to be one of the key birthplaces of mixed-race culture in modern America, and that's one of the reasons why I chose it. And music is one manifestation of that culture and perhaps the most evident one -- though not the only one. The way various races interact in the book -- there are Mexicans, an American Indian, an Asian Indian, and so on in there, too -- is, I hope, a little hard to pin down. And, of course, changes as the time period changes.

Does that help any? I hate to be vague or gratuitously elusive, but, you know, I do my best not to be easily pinned down myself.