Dagoberto Gilb will be at the Yarborough Branch Library, 2200 Hancock Dr., on Wednesday, July 30, at 7pm. C-SPAN's Book TV will tape the event.

For most in the United States, the Rio Grande and the rest of the Mexican border constitute an exotic line, fictional and amorphous, where everything that is safe and sound simply ends. To cross over its slow-moving waters is much like falling off the waves at the edge of the world when it used to be flat. But for the notorious Dagoberto Gilb and millions of men and women, this is the water where the world itself begins. Gritos, a collection of essays by the heroic carpenter-turned-writer, is a seduction in the form of a study of ironies and frustrations -- and yes, even stupidities -- one encounters as a thinking Chicano in the straight world. And this Chicano thinks a lot.

Gilb, of course, is probably best known in these parts for his most recent collection of stories, Woodcuts of Women. Or for his brash talk. Or his faithfulness to his blue-collar ethos. Or for teaching at Southwest Texas. Or for a famous row with Texas Monthly. All of which are great for becoming a well-known literary superdude. But ultimately, none of this matters in the case of Gilb the essayist. What makes Gritos such an enlightening and emotional read is not just the subject matter (writers from Richard Rodriguez to Mike Davis have tackled some of this before) but Gilb's -- gasp! -- subtlety and great ability to overwhelm the reader with mere hints and traces.

In the very first essay, "My Landlady's Yard," for instance, Gilb uses an innocent-enough topic -- the types of grass that people plant in El Paso -- to convey the illusion of identities in his border community: "What I've got is patchy at best, and neglected, the brown dirt is a stronger color than the green."

Not to fear, though, for Gilb still shines in these essays with his fearlessness and wit, as well. Most impressive are his clarity and his measured indignation at the inability of white America to grasp Chicano beliefs or culture. Gilb even begins his book with a square-one lesson in the Mexican essence of the Southwest. As the book progresses, though, the problem he's addressing manifests itself in a million little ways -- the misunderstandings and silly expectations he encounters from editors and the like, the quiet heat of construction workers trying to learn how not to be deported.

At the heart of these encounters is the burning knowledge that nobody seems ready to recognize: Gilb is a legitimate and undeniable talent. Not just in "Chicano literature," not just in a certain part of the country or in select college syllabi, but in the vast black sea of American ink. And this becomes a tiny example of the Chicano experience in the United States as a whole. The telling name of his book is thus appropriate. It is a grito because it has to be, because in order to be heard, one sometimes has to yell. Suddenly. Loudly. But wisely.

The essays move on to cover topics ranging from family life to the imagined Texas most have accepted as truth. In one particularly exciting piece, "The State of Texas Literature," Gilb once again rips at the velvet drapes of state literati, even fantasizing about giving Naomi Shihab Nye's "silky tan braids" a "couple of real hard yanks." Wow. Whether the reader concurs with Gilb's reactions to America or Texas or anything else, it's clear that his positions are written with the brain, heart, and loins always present. 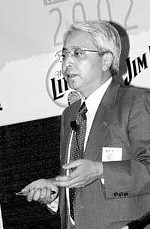