Fixing Up the Fringe 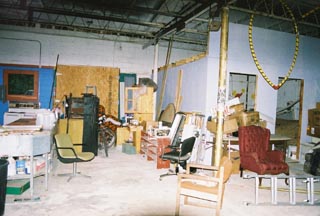 This is the first in a series of articles by Josh Medsker as he attempts to re-establish a zine library in Austin. Keep an eye out for future installments.

I'd seen one zine library before, called the Independent Publishing Resource Center, in Portland, Ore. It was big. It held 4,000 zines along one wall with a bank of donated computers on the other wall and a room of turn-of-the-century presses in back. When I found the zine library here, which I discovered is at MonkeyWrench Books, it was nothing approaching that. It was one tall, skinny bookshelf on the wall, in the corner. As I talked to the person in charge of the zine collection, he told me he had no way for people to check out the zines. My heart sank. And he didn't have any room in the store to expand the collection. My heart sank further.

I remembered a zine library at the Rhizome Collective, an artists and activists' space off East Seventh. Rhizome provides space for Bikes Across Borders, which takes donated bicycles down to Mexican border towns for maquiladora workers, which I'd written an article about last fall for Clamor. There is also a Food Not Bombs kitchen on the site, a "free school" for children and adults, a bicycle repair shop, and a Capoeira (Brazilian martial arts) and dance area. I called the Rhizome Collective and was told that the former zine library had been taken down and was sitting in boxes, and that the Inside Books Project, which donates books to Texas prisoners, was now in the space.

I met with Stacey Pettigrew, the woman I'd spoken with on the phone, who ran the free school until recently but gave it over to someone else. "We never really had a library," she told me. "It never really had official hours. We started collecting the things when we first got this space, 21é2 years ago." She suggested I talk to Skot, who used to run the zine library but now runs the Inside Books Project. Skot said the zine library had pinballed among a few people before bouncing down to him, and now he had to give it up because he was too busy with other projects. I asked him how many zines were in the boxes. "Probably a couple thousand," he said. "There's stuff from the Sixties and Seventies, [but] not much. Most of the old stuff is from the Eighties. Most any zine there's been more than one issue of, from the last 10 years, there's one copy in there, at least. It's all donated from other people, from their collections." There were autobiographical zines with catchy titles like Pants That Don't Fit, Pudge, and The Devil in the Dishes, as well as more professional-looking political zines such as Profane Existence and Slingshot.

I've been into zines for nearly 10 years, writing about them for newspapers and magazines, making my own, or picking up everything I could find in Anchorage, Alaska, where I grew up. During most of the Nineties, we had a punk shop in Anchorage, Thee Extreme, which carried such must-have zines as Maximum RocknRoll, Flipside, and later Punk Planet, as well as Anchorage's homegrown zines of the Nineties, like AK Verve (now defunct), which focused on local grassroots politics and arts, as well as punk rock zines like my own Noise Noise Noise (also defunct) and PTBH! (not defunct, but now based in Seattle). After doing some thinking, I decided that if no one was going to step up and take over the zine library at the Rhizome Collective, I should do it myself. I'd done some research online about an old zine library here in Austin called Safe Haven and e-mailed some questions about it to Mark Grady, the former librarian there, but I never heard back.

I went to the collective's weekly meeting on Sunday, April 13, and proposed the idea of my taking over the zine library. They were thrilled. "Welcome to the family," they said. (I'm not making that up.) We sat around for an hour, batting ideas back and forth starting with where to put the library, and how to set it up so no one would steal anything. We also talked about what the hours would be and what day (or days) the library would be open. We finally decided to put the future zine library next to the Food Not Bombs kitchen, in the enormous, warehouse-turned-work-area. There was a place to put a cabinet, if I wanted to, and most importantly, a space for people to sit and read. This was going to be a real library, with real hours and a real librarian, if it killed me.

Fixing Up the Fringe
Alive, Authentic, Real ... and Empty

Fixing Up the Fringe
'I was sick of the place, and sick of staring at all of the work to be done'