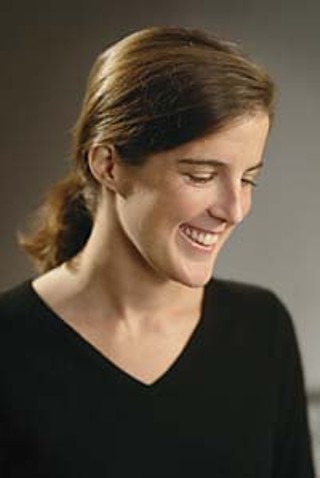 Amanda Eyre Ward will be at BookPeople at 7pm on Friday, March 21, to launch Sleep Toward Heaven. All Night Lincoln will perform, Artz's Rib House will cater, and free wine will flow.

We're not reviewing Amanda Eyre Ward's debut novel, Sleep Toward Heaven (MacAdam/Cage, $24), and we're not interviewing her as an author, either, because she has contributed to The Austin Chronicle for more than three years. I am a friend of Amanda's, as is my predecessor, Clay Smith, and Screens editor Kimberley Jones, and because I would have a rough time running a negative review of her book should a critic submit it (and wouldn't write one myself), a positive review would be almost automatic, which would be a negative. We would have a rough time running any review, which is why I haven't assigned one. It would be a conflict of interest. We are, however, excerpting an early chapter of the book, which is the story of three women -- Celia Mills, an Austin librarian who will try anything, even an afternoon tryst with an undergrad she meets at the Hyde Park Post Office, to forget her husband, who was murdered by Karen Lowens; Lowens, who awaits her execution on death row in Gatestown; and Dr. Franny Wren, who flees her engagement to a washed-up singer named Nat, returning to Gatestown, her childhood home, where she spends altogether too much time drinking Scotch at the Gatestown Motor Inn Lounge -- whose lives intertwine over the course of one summer. We are proud and happy to do so, which I don't see as a conflict of interest at all. -- Shawn Badgley

The bikini arrives on Saturday in a fat brown package addressed to Mrs. Henry Mills, 2805 South First Street, Austin, TX 78701. I am sitting in my bathrobe in the front room, drinking coffee, when I see the mail truck pull up. The mailwoman's navy shorts are tight, and I can't help but think of the uncomfortable day she has ahead, what with polyester shorts and the temperature near a hundred. I make a mental note to tell Maureen that I am having positive thoughts. "I recognized at that point," I will tell Maureen, "that I would rather be me, sitting in my air-conditioned house, than that fat mailwoman in her tight shorts." Then it occurs to me that the mailwoman might have a fabulous husband at home, a husband who quite likes her shorts, and who is just waiting to jump her the minute she gets home from delivering bikinis to people like me.

I wait for the woman to head across my lawn to the house next door before rising from the couch. Although I originally hated Henry's soft couch (I think I may have, in fact, called it a piece of shit), after his death I decided to keep it. It smells like Henry, for one thing, and Priscilla likes it. My mother has suggested I clean house, has even offered to buy me a snazzy living room set with her new husband's money, but I have decided that I like things the way they are. I would not tell my mother or Maureen, but there are still times that I press my face into the fabric of the couch, thinking of Henry in college, doing bong hits, even having sex with girls on the couch, playing poker, Henry in grad school, studying sheet music, Henry asleep on the ugly couch, his baby face smooth, his mouth. Sometimes I still pretend he is just away, on a trip, that he is coming home.

In the mailbox, I find an invitation from Jenny and Sean and the bikini package. I throw away the invitation. Jenny and Sean were our best friends when Henry was alive. We met them at the dog park: when Priscilla wouldn't stop playing with their dog, Henry invited them back to our house, letting both dogs jump in the back of our truck for the ride. After that, we'd make dinner together at least once a week, drink beer in the backyard, let our dogs run each other tired. We talked about our jobs -- Jenny is a programmer and Sean a history teacher -- and movies we liked. We went to their wedding at the Guadalupe River Ranch, and they were the first people we called as husband and wife, from a pay phone at the Elvis Chapel.

After Henry's death, they stopped by all the time, bringing casseroles. Casseroles? We never ate them when Henry was alive. Why would I suddenly want to start eating platefuls of hot tuna? I stopped answering the door. I did not return their calls. Eventually, Sean and Jenny got the hint and let up. But they sent me an invitation to the shower for their first baby, two years ago. Then they sent me a picture of the little one.

But back to the package. Both pieces of the bikini are in separate plastic bags. The magenta is even brighter than it was on the girl in the catalog. J. Crew has also included a pamphlet of new items and a coupon for five dollars off my next purchase. Priscilla has taken my spot on the couch, and she moves grumpily to the side when I sink back in. I open the pamphlet and sink into the lives in front of me: there I am, frolicking on a New England island, eating corn and crab, sitting on some lanky boy's lap, my feet in the sand.

Why not do a Texas catalog? Sweaty teens making out by Barton Springs, adorable blonds drinking margaritas and eating nachos, snotty teachers microwaving Hot Pocket sandwiches in the teachers' lounge? I think about what my personal J. Crew catalog would look like: lonely young woman talking to her dog while modeling madras culottes, librarian shelving books in an eggplant-colored tankini and wedge heels. I start to laugh, and Priscilla looks at me with pity. Maureen would not be pleased with this scenario.

I go into the bedroom to try on the bikini. Underneath my robe, I am wearing one of Henry's Grateful Dead T-shirts. It was one of his greatest unhappinesses that he never took me to a Dead show. We planned on driving out to California or Kentucky, but work always got in the way, and then Henry was gone, and Jerry, too. I still play Henry's bootleg tapes. His favorite show was in Oregon, in August of 1988. He would play the last song, "Knocking on Heaven's Door," on the stereo. He would lie down on the floor and close his eyes. The dog would lie beside him, and sometimes I would, too.

The bikini fits pretty damn well. I've lost weight in the last five years, which I tell my mother is one plus side of having your husband gunned down. Eating together had been a big thing for us, and I haven't gotten the hang of liking food again since Henry's death. I eat because I don't like the dizzy feeling I have when I forget to eat. I have a cabinet of vitamins and energy shakes, which are easier than dealing with a fork and knife.

I am modeling the bikini for Priscilla when the phone rings. It's been a while since reporters have called me, so I have started to answer the phone again. If it isn't my mother, it is my mother-in-law. "What are you doing, sweetie?" It is my mother.

"Does it look fabulous?" I look at myself in the mirror, bones and old muscles and circles carved underneath my eyes. My skin is the color of chalk. Priscilla looks at me, her head cocked.

"Good," says my mother. "Sweetie?" she says. "Have you read the paper today?"

"What?" My stomach doesn't even sink anymore when people say things like this to me. It is as if my stomach is already sunk down as far as it will go, all of the time.

"They're executing one of them. Jackie something?"

"August twenty-fifth," I say. The execution will be held in Huntsville. Until then, Karen Lowens lives on Death Row in Mountain View Unit in Gatestown, which is about two hours from my house.

"How are you feeling about it all?"

"Well, call me, if you need anything," says my mother, trying her best over the miles. She lives in Wisconsin, where I am from.

I hang up the phone, and there I am: a widow, in the kitchen, in a magenta bikini.

Reprinted with permission from MacAdam/Cage © 2003