The Bookslut, AKA Jessa Crispin, is getting people excited 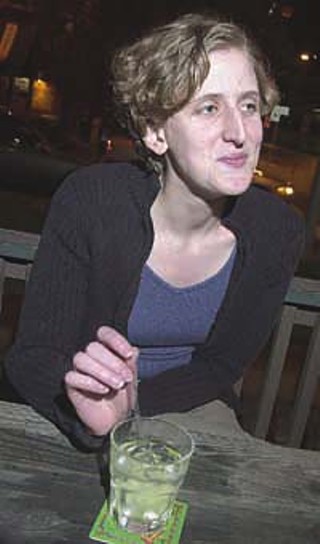 One of her cats -- Acker, not Dobbler, because Dobbler "loves everyone because that's our idiot kitty" -- has chosen to attack me. "Don't worry," the Bookslut says. "She does that to everyone, appropriately enough." The Bookslut's boyfriend, Kenan Hebert, is playing around on the computer and talking about his curious relationship with the UPS man. "We're friends. When she opens the door, he's disappointed. He asks for me." Their cramped but inviting South Austin apartment is very hot, dry as a desert from all of the paper from all of the books, likely, and very bright. There's a maroon chair in the center of the living room. It looks comfortable, and the Bookslut perches on its back like a parrot on a pirate's shoulder.

The chair is where it's at. The chair faces a few of the Bookslut's many bookshelves, and the chair is surrounded by books on the floor. Like the books are clamoring, almost. There's a Dorothy Parker quote on the bathroom wall, something obvious but invigorating nonetheless. "That's when I knew Kenan was the one," explains the Bookslut with a smile. "I was having a dinner party, and he was there, and I was drunk, and he said that I looked like Dorothy Parker waving around my drink and acting like an idiot." The Bookslut prefers dinner parties to just about any social gathering. She's addicted to Gourmet magazine. She's a self-described magazine junkie. That addiction, however, is nothing compared to her compulsion for books. And for telling people about those books.

Her mother won't read Bookslut.com, the weblog and review source that Crispin founded in February 2002. Her mother's turned off, apparently, by the line-drawn logo of Crispin, bare-assed, reading a book, which Crispin's brother-in-law drew. "I like the way it looks like her hair," Hebert says. "He really got the hair. It's short. And that's your ass, exactly. Do you want to show him the pictures of you in the bathtub with the books?" She does not, and so we decide to take a ride.

Crispin and her work are at the forefront of one of creative opinion's serious trends. Along with MobyLives, BookMunch, The Minor Fall and the Major Lift, Spike Magazine, and Hyde Park Review, Bookslut has been charged as a keeper of the culture. The Web is rapidly becoming the last and most livable refuge for our marginalized thinkers: the literate, the rhetoricians, the critics, the muckrakers, the aesthetes. You know this. Crispin knows this. By logging her daily thoughts and a monthly online edition full of reviews and features, she's doing a service to readers everywhere, and doing it with enough intelligence and humor to draw attention across town and, a bit more importantly, across the online universe. Though unlike most sluts, she doesn't seem to be doing it just for the attention. 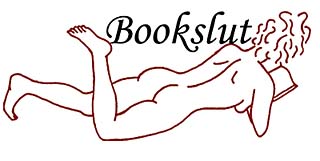 For one, Crispin and two of her several unpaid staffers (they keep the books that they discuss, but the site's meager revenues go straight to overhead), her sister Jen and Michael Schaub (they're here in the States, while others call the likes of Britain and Japan home), are conducting the 100 Books Project. This is what we in the business like to call a worthy cause. They have come up with their own list of the 20th century's best writing. They are reading the books -- you can see them color-coded by assigned reader at www.bookslut.com/features/100books.htm -- and then they are writing about them, briefly.

"I think I was drunk when I came up with that idea," Crispin groans. "Enthusiasm dropped as soon as we were done picking out the books, which took weeks and weeks and weeks, because we couldn't come up with a list to use, so we had to come up with our own list. But it's going well, I think. It basically just gets us to read them, because, oh my God. Otherwise."

Otherwise, Crispin is afraid of being a fake, she says. Her mild critical anxiety of influence is refreshing; her erudition -- especially within such genre circles as speculative fiction and comic series -- in the eyes of many already established, she remains as intellectually curious as a 7-year-old spending entire summer days at the library. Her writing does not pull rank. It is not domineering. She is in awe of some -- "When I was introduced to Neil Gaiman, I couldn't speak, but I almost vomited" -- and infuriated by others. Her disdain for the likes of Jonathan Safran Foer and Zadie Smith -- "It's all a lie," she says matter-of-factly of the "author-as-celebrity phenomenon" -- is made abundantly clear on what seems like a weekly basis. And her dissatisfaction with BookPeople and Book Woman was made abundantly clear in a recent transcribed conversation with Schaub, which can be found at www.bookslut.com/features/0103/indievschain.htm.

More of a point-point than point-counterpoint, the Crispin-Schaub conversation was a response to the recent buzz regarding Austin as a literary hotbed (as the Austin American-Statesman claimed in November) and to the debate (actually, more like the printed equivalent of two people arguing two different things for two hours in two different rooms and coming to no discernible conclusions whatsoever) between Michael Barnes and Spike Gillespie (also in the Statesman) on chains versus independent bookstores. To be fair, the Crispin-Schaub response wasn't exactly authoritative, but it certainly inspired the ire of BookPeople, Gillespie, and others.

The piece chastised Book Woman's "angry feminist lesbian separatists" while arguing that at this point, Austin doesn't need a feminist bookstore. And it criticized BookPeople's selection ("hideous [aside from] magazines and incense"), employees ("I want to like them, I really do," said Schaub, "because they're very pretty ... but they don't help you"), and pricing (Schaub again: "I understand the economics behind that, but I don't think you can convince people to break themselves just for the sake of indie cred"), concluding that consumers are better off shopping at the likes of Amazon or Half Price Books. "After all, isn't it the books, not the bookstore?" Crispin asks pointedly.

"They're certainly entitled to their opinion," Ellis says. "But many of the details in their article are inaccurate, incorrect, and incomplete." Susan Post, Book Woman's founder and owner, expressed similar sentiments. "I don't understand why they have to lie," she laughs. "I don't really know where it's coming from. We're nice to everybody, if they're nice to us. We've had to throw out some drunk frat boys, but that's about it."

In any case, for better or worse, Crispin won't have to worry about Austin bookstores for too much longer. She, Hebert, and Schaub are moving to Chicago in September, where she plans to continue and expand Bookslut. "I'd be very sad if it went away," she told me while shopping at Half Price on Guadalupe, her arms filled with the likes of Alasdair Gray, Graham Joyce, Octavia Butler, Shirley Jackson, and James Kelman (she's in a fiction mood today). "I wouldn't know what else to do with myself."