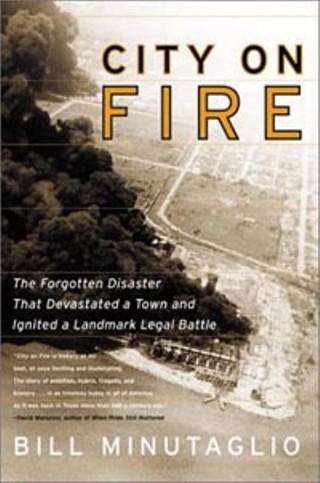 City on Fire: The Forgotten Disaster That Devastated a Town and Ignited a Landmark Legal Battle

The 1947 Texas City, Texas, explosion "claimed more lives on American soil than any other man-made disaster in the twentieth century," Austin writer Bill Minutaglio reports in the preface to his fascinating new history of this almost-forgotten event. The official tally was of some 581 dead, while the real number might be twice as much, since many of the dead came from the undercounted barrio and the Bottom, or the black side of town.

Bill Minutaglio will be at BookPeople on Wednesday, Jan. 15, 7pm.

On April 16, 1947, the Grandchamp, a French freighter, was being loaded with 51,502 100-pound bags of ammonium nitrate. It was already loaded with 16 cases of small arms ammunition, as well as other assorted goods. The ship was inordinately hot. The bags started to burn. Then, at 9:12am, an explosion ripped the ship apart, initiating a cascade of other explosions that destroyed the Monsanto plant near the dock, a Union Carbide plant, and numerous oil refineries. Impacted by the flames and debris, much of the town was wiped out. The blast was strong enough to rip the wings off two planes flying overhead; the 40,000-pound deck was shot half a mile away; the entire harbor basin was briefly scooped out into a 20-foot-high tidal wave that burst against the wharf area.

Minutaglio wraps the beginning of his story -- the 5-4-3-2-1 to a disaster we know is coming -- around the mayor of Texas City, a veteran named Curtis Trahan, and a charismatic priest, William Roach. Trahan is one of those heartening New Deal progressive types -- a surprising creature to hold power in a town beholden to the petrochemical industry. Roach, Minutaglio makes out, was a "jangled fool for Christ," fighting for the poor and the oppressed. Minutaglio attributes to Roach a holy premonition of the disaster, ultimately derived from the mysterious prophecies of some nun. However, to this reader, the more rational explanation is that Roach -- who was well-connected down at the docks -- was aware of the hazardous materials flowing through the Texas City port. After all, the Houston Port Authority, without any divine visitations, had quietly refused to allow ships to load ammonium nitrate. This is why the Grandchamp had to make an extra stop at Texas City that fateful day. In the event, Roach was one of the explosion's victims.

Minutaglio relates, in satisfyingly gruesome detail, the immediate aftermath of the explosion. A boy, running from the flames, takes the hand of a woman in the street who is apparently running, too, only to look up and see that the woman is headless. A ship captain's wife is sucked through her car window by the blast. In a macabre bit of irony, hundreds of white people, who were coated with blackish tar and oil from the blast, were consigned to the "Negro" section of the Galveston hospital to which they were taken. Such details are worthy of Melville or Twain. But beside the gore, City on Fire also shows how the powerful economic, political, and racial forces that created Texas City were compromised in the disaster. The U.S. government was the source of the ammonium nitrate that day. The government had used the substance during the war for bombs and was now converting it to fertilizer without warning about its dangers. Unfortunately, the "landmark legal battle" to which Minutaglio's subtitle excitedly refers is a disappointment: The Texas City families sued the U.S. government and, on appeal, lost.

As Freud once taught, there are reasons for forgetting as well as for remembering. Minutaglio doesn't explain why we have forgotten Texas City, but he does show us that certain powerful forces -- including the feds and the petrochemical companies that were heavily clustered in Texas City -- had powerful reasons for wanting us to. -- Roger Gathman

Also this week: David Marion Wilkinson (see the Chronicle's review of his Oblivion's Altar at austinchronicle.com/issues/dispatch/2002-11-15/books_feature2.html ) will be at Barnes & Noble Arboretum on Saturday, Jan. 11, 7:30pm... Rich Mackin, the corpo-baiting correspondent behind the zine Book of Letters and the book Dear Mr. Mackin (Gorsky Press, $10 paper), will be at MonkeyWrench on Wednesday, Jan. 15, 6pm... DiverseArts opens its Word/Jazz Performance Series 2003 with a free performance poetry/improvisational "groove" set featuring raulrsalinas at Resistencia Bookstore on Thursday, Jan. 16, at 8pm... Speaking of the oral tradition both local and across the land, the registration deadline for April's Austin International Poetry Festival, which will include the likes of Cyrus Cassells, Anjelina Polanaskya, and Stephen Gill, is rapidly approaching. Check www.aipf.org for all the pertinence.