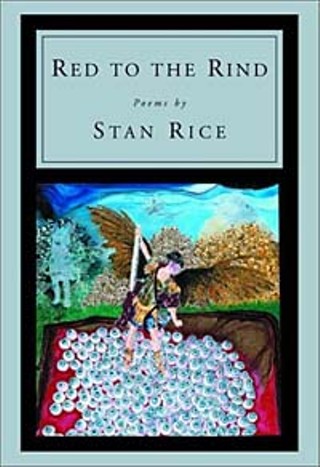 Red to the Rind: Poems

In Geoffrey Chaucer's "The Parliament of Fowls," the poet asserts that "out of old books ... comes all this new knowledge that men teach." From the epic traditions of Greece and Italy, we have the age-old motif of the hero's descent into the underworld: Odysseus in Homer, Aeneas in Virgil, and Dante in his own Inferno. In American literature we have William Carlos Williams' Kora in Hell and Hart Crane's "The Tunnel" section of The Bridge. Now Dallas native Stan Rice, who died at 60 on Dec. 9 of brain cancer, has rung his changes on this infernal theme. Set in the French Quarter of New Orleans, the city where Rice had lived since retiring as head of the Creative Writing Department at San Francisco State University, his 15-page poem titled "The Underworld" is perhaps the most striking piece in Red to the Rind, a collection that finds the poet "singing yet" with alternating poignancy and black humor in occasionally rhyming lines that achieve viscerally rending and tenderly surreal connections. These connections are his alone.

The opening stanza of the book's touchstone poem, subtitled in underlined bold type "A messenger from the underworld," harks back to the traditional summons to the nether region for purposes of penance and recovery. The image in this stanza is a telling introduction to Rice's wonderfully probing and enlightening piece: Here, the speaker receives a visit from a hummingbird, described acutely as a "hypodermic/Between two blurs,/Polished and honed/By use, like a spur ... ." Prompted to the necessary descent, the speaker in the poem reports from a parking lot by means of two-way radio (responding to "where are you now" from the other end, the question followed by "10-4"). The speaker observes that "What's happening here is definitely not life after death." He describes teenage girls screaming from behind velvet ropes and portable toilets having overflowed, which he compares to a scene as out of a Hill Country deluge: "I assume you are familiar/With ... how/After the water has receded the grass lies flattened/And cars stand on their noses in mud ... how eighteen-wheelers/Have been bent in half by the water's force, how the curled/Has been straightened and the straight curled,/Well that's how it looks all the time in the parking lot/Outside the door to the underworld, Over."

Rice's shorter poems, usually much less than one page long, have their own special appeal. But it's the two longer poems -- "The Underworld" and "Dismemberments" -- that represent most fully Rice's amazing range of wit and insight. Despite his awareness of the loss or remorse that never leaves one alone but returns to haunt and plunge one into self-inflicted torment (a kind of Mardi Gras Dis where "a blue black jackal/Guards the oval ... resembling the trunk/Of a car. Which is the last shape you'll see"), Rice recognized and learned to accept and sing the praises of life's paradoxes, in particular the one found in his short Edenic penal-colony poem, "Garden Doghouse," with its paradox that lies at the very heart of all his writing: "The love that died is teaching me to love."

Dancing on Main Street
Lorenzo Thomas of Houston is a thinking-man's writer. His critical studies of folklore, modernism, and music are substantial works, and in both prose and poetry he always addresses the difficult issues.