The Burning Bombing of American Letters 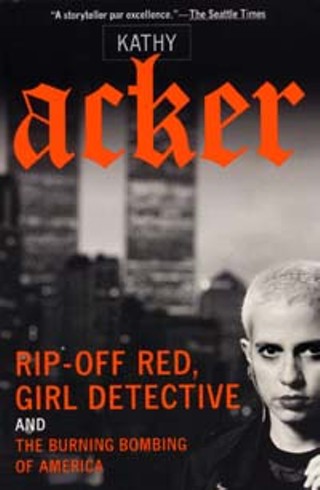 Rip-Off Red, Girl Detective and the Burning Bombing of America

Kathy Acker died in 1997, the same year as Allen Ginsberg and William Burroughs, a fact that may or may not have given pause to students of literary coincidence. Acker was often mentioned in the same breath as both, and while Jeanette Winterson's introduction to Essential Acker argues that in fact she's more closely aligned with European sensibilities and habits of statelessness, it's obvious that her cultural currency compares to that of the American writers she shuffled off with in a way Calvino's and Borges' do not. 1978's Blood and Guts in High School was Acker's crossover hit, her Naked Lunch as it were, the experimental novel received as pop smash; bohemia had decided it liked French theory and low culture (again, or still), and for the next 15 years Acker's works, along with output by the likes of J.G. Ballard, or Baudrillard, or the latest Semiotext(e), were pored over like fetish objects, displayed and loved and sometimes even read. The tattoos helped.

Nothing that strange, really, and nothing the 20th century hadn't seen before. Except: Acker put a body, a woman's body, in the middle of it -- her insanely scholarly mind; her ridiculously disciplined talent; her endlessly experimental curiosity; the incendiary titles; the appropriation of the canon (and Harold Robbins); the conflagration of memory, dream, fantasy, and history; the true and transgressive porn (always) converged around desire and all it implies, and: A woman (or a sometimes-woman) was the desiring subject. Her best trick (though that's not all it was) was making it seem like it was the first time that had happened. Acker cut a swath of influence through literary and pop culture so wide that she might have entered that paradoxical state to which all cultural goliaths are prey: waning visibility by virtue of social penetration.

Two new publications could help keep that from happening. Essential Acker is just that, a primer of almost everything (save the essays), starting with 1968's "Politics" ("my first work"), moving through the hits (Blood and Guts in High School, Kathy Goes to Haiti, Great Expectations, Don Quixote, and the superpopular Empire of the Senseless) and short pieces ("New York City in 1979," "Hello, I'm Erica Jong"), ending at the fitting and full culmination of all her vulnerable swaggering adventurer poet girl-women tales, Pussy, King of the Pirates. The anthology's chronological arrangement reveals a few things that memory does not. One is that Acker, unlike her modernist forbears, seems to become more clearly narrative as time passes (although this could be a function of editorial choice). Other things we might have forgotten: She had a way with the mechanics of the unconscious, she was a cutup in more than one sense, and she was obsessed with the liberating possibilities of intellect and passion.

Acker was neither the first nor last of the intellectual pornographers, of course, but the previously unpublished Rip-Off Red, Girl Detective (1973) seems an argument for early inclusion in the ranks. Here the pirate is a private dick, and while the inevitable stroke-book tedium can arise (and may be intentional), it establishes many of the obsessions that dominate her work: violence, autobiography, New York City, bohemia, oedipal literalization and inversion, and, above all, the lady and her adventure. The quite lovely prose-poem The Burning Bombing of America (1972), which turns out to contain some of her most precisely beautiful, perfect images, establishes the other: revolutionary desire. Published with Rip-Off Red, also for the first time, it's an artifact of a brilliant career, and a testament to the native talent underlying it. Read it, and everything after: You need to, and she deserves it.