... Are the luckiest authors: Harmony and tumult at the 2002 Texas Book Festival

Old friends Dagoberto Gilb and Annie Proulx complemented each other extremely well during their "Heartsongs & Gritos" panel in the Senate Chamber on Saturday. The day before, Gilb indicated that he would make an issue of the Southwest Texas State Dept. of English Personnel Committee's recommendation that he be denied early tenure and professorship, but aside from a mention of it earlier Saturday, he was tight-lipped. (Photo By John Anderson)

The threatening clouds of a Dago downpour passed over with nary a drizzle during his "At the Crossroads: Mexican-American Literature" appearance with Sandra Cisneros and Jimmy Santiago Baca on Saturday morning at the Texas Book Festival, but his was hardly the only storm system. It was, however, the biggest on a sunny weekend at the state Capitol that found couples young and old lounging in the grass and authors young and old biting each other in the ass like the men and women who most often inhabit that big chunk of limestone.

Did that sound appropriately New York Post? I hope so.

On Nov. 11, Dagoberto Gilb was recommended denial of early tenure and professorship by the Southwest Texas State University Dept. of English Personnel Committee. At press time -- and, indeed, most likely until late spring -- his status is uncertain, with sources saying that Chair Lydia Blanchard "supports" him and that the recommendation will undergo further scrutiny. Gilb, the outspoken and outsized talent whose award-winning collections The Magic of Blood and Woodcuts of Women are but a fraction of his staggering output, said in the days leading up to the festival that he planned to make an issue of what he considered "not really about me, personally, but about Latino faculty in general, which is worse." Gilb mentioned the committee's "arrogant and superior" decision on Saturday's most formidable panel, but the matter was dropped and subsequently overshadowed by Cisneros and Baca's dissatisfaction with the direction of moderator Juan Rodriguez's questions, which they heard as overly academic, overly political, and, apparently, overlong. The problem was that Rodriguez, who teaches at Texas Lutheran in Seguin, "seemed to think that everybody in the House chamber was there to hear him," said one observer. "His introduction that was basically him laying out his thesis was a half-hour long." Despite the authors' eloquently restrained responses, said another audience member, "I've never seen a group of panelists so at odds with their moderator." 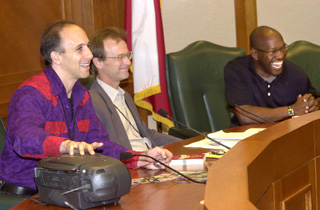 (l-r): Elijah Wald, Joe Nick Patoski, and Bakari Kitwana share one of many laughs at their astute but loose "Voices of Their Generation: Hip-Hop & Narcocorridos" panel on Saturday. "I think that in terms of the cutting edge of hip-hop, the cutting edge is no longer the music itself. I think the music has done all it's gonna do," said Kitwana, author of Hip Hop Generation and former executive editor of The Source. "I think that the cutting edge in hip-hop, right now, is the transition that it's making from being just a cultural movement to being a political movement." (Photo By John Anderson)

Gilb avoided the tenure subject altogether later in the day at his Senate chamber discussion with Annie Proulx and SWT creative writing head Tom Grimes. Proulx was her abrasively brilliant self, dismissing dumb questions while illuminating her celebrated research methods and reasserting the importance of American literature in the 21st century. Gilb, who was actually understated in her presence, told me on Monday afternoon that he believes Proulx's work will someday stand alongside Herman Melville's. Their talk -- along with Bakari Kitwana and Elijah Wald's "Voices of Their Generation: Hip-Hop & Narcocorridos" panel and Richard Rodriguez's appearance -- was a Saturday highlight; Sunday's NPR Bases Loaded Tour, with Neal Conan, Frank Deford, Scott Simon, and the impressive Sharon Robinson, was also wonderful. But the save of the weekend came on Saturday afternoon, when Nick Spitzer and Robert Santelli had to cancel their appearances on the "American Roots Music" panel, which could have been fatal to the gathering's chances. Instead, moderator (and Chronicle contributor) Dick Holland and Bill Malone (Country Music U.S.A.) more than made up for their absences, with Malone wowing an already wowed crowd with a sing-along of "Will the Circle Be Unbroken?"

There were a handful of similarly harmonious moments at the 2002 festival, which was cozy in a 12,000-people Austin kind of way, but also contentious in a hundreds-of-authors-seeking-a-little-drama kind of way. Let me first say that there were several standing-room-only panels, many of which I couldn't have attended had I not been press, and that there were more people waiting in line to see Cisneros' solo spot on Saturday than there were people waiting in line to see Lance Armstrong one year ago on a muggy Sunday, which is saying something. Let me secondly say that festival headliner Walter Mosley had to cancel at the last minute for an undisclosed family emergency. This wasn't good news. Then Kinky Friedman pissed off legendary heartland novelist Fannie Flagg at the black-tie First Edition Literary Gala on Friday night, with his trademark racial jokes and cigar rubbing her the wrong way. "Of all my introductions, that was by far the most recent," Flagg reportedly said after Friedman called her up to the podium. On Saturday, Michael Beschloss and Michael Lind are said to have squabbled "like a couple of history geeks" on the "Vietnam" panel and had to be broken up by moderator Bill Broyles.

But in what was by far the strangest showdown of the weekend, the "Spoofing Around: Satire in Fiction" panel with novelist Edward Swift and the as-yet-unclassifiable Neal Pollack didn't go well, especially in its aftermath. Swift, who has contacted Director Cyndi Hughes and Chair Mary Margaret Farabee with statements outlining "outrage" and "embarrassment" at his pairing with Pollack, said on Monday that "that Pollack man should be thrown out the window ... he is vulgar in every sense of the word. From the toilet. [The festival] should put him in a room of his own and invite everyone who loves his scatological language to go there and bathe with him." Pollack, who at the request of moderator Sarah Bird read his notorious poem "I Wipe My Ass on Your Novel," was taken aback by Swift's comments but quickly regained his composure. "He was an example of the kind of writer I make fun of, but it was maybe the first time I actually ran into one like that, in person. I thought it was fun," Pollack said. "He is a man of learning and erudition, but he's also a longwinded pontificator ... He's like Truman Capote, only a little more square."

"My face has been slapped," Swift says. "But it will not be slapped a second time. I will be much more careful in the future about the people I associate with on panels. ... The Texas Book Festival and Neal Pollack will rue the day they got crosswise with Edward Swift."

To which Pollack replied: "I do hope that the Texas Book Festival asks me back next year, because everyone I came into contact with treated me with warmth, wit, and dignity, and it was an altogether special weekend."

Cyndi Hughes couldn't be reached for comment. Also, I got a speeding ticket on the way to my panel, which I need to talk to her about.