Volunteers of America: If you're feeling sinister, North Loop's newest wants you 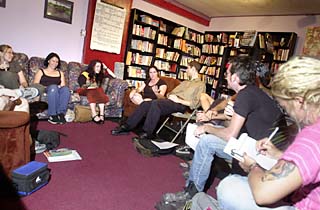 A July 30 collective meeting at MonkeyWrench Books, including a pre-mohawk Connor Hopkins (second from right) and Sarah Lange (second from left) (Photo By John Anderson)

Look for something about the bookstore in the Chronicle around the 15th (we hope). If you don't see it, write many angry letters demanding more coverage of commercial ventures dedicated to the cause of bringing down capitalism. They'll HAVE to write about us.

THE FOLLOWING INTERVIEWS TOOK PLACE BEARING THE FULL AUTHORIZATION OF THE MONKEYWRENCH BOOKS COLLECTIVE MEMBERSHIP PER A JULY 30 MEETING. ALL BACKGROUND INFORMATION DRAWN FROM THOSE INTERVIEWS THEREFORE SHARES THAT AUTHORIZATION. IT IS, IN OTHER WORDS, ABOUT AS AUTHORIZED AS A STORY ON ANARCHISTS SELLING BOOKS CAN GET.

But are they anarchists? That's the question I had, and I'm hoping that might be one of your questions. After all, there's a short story by some Russian that involves an anarchist burning books, or at least an anarchist who can't read. I can't remember which Russian. And obviously I can't remember if his character burned books or if he just couldn't read them (or both). Either way, his character didn't like books. So, I am not an anarchist. I like books. As far as I can tell, the people at MonkeyWrench Books like books, too. Do I follow? Do you? Was the Russian wrong? Was his a faulty logic, or was mine? Should we even be dealing in logic here? Order and leadership are no-nos. I do know that, for sure. So maybe we should start with that. MonkeyWrench Books has no leaders, no managers, no bosses. They have no order. Or do they? I mean, their books are in order. Their coffeemaker works in an orderly fashion. But they don't necessarily order each other around. Though one commandeered the other to make some more coffee when I asked for some. They pay their rent and their bills. This is all very complex for a non-anarchist. For those who most believe are anarchists, it's a bit complex, as well.

"The first thing to say is that we're not explicitly an anarchist bookstore," says Connor Hopkins, who works on the Space Committee, which, as daunting as it sounds, mainly involves planning out the use of MonkeyWrench's physical location for meetings and events.

"I don't think any one of us could speak for the political identity of any other collective member," adds Sarah Lange, a diplomatically mature 23.

Dan, who bears a striking resemblance to the young actor Cole Hauser: "Right. Sure. Right. Yes. The mission statement says that it's a radical bookstore, and so part of that just means that -- "

Lange: "I mean, we operate non-hierarchically."

Hopkins: "Our organizational principles are drawn from anarchist principles, but I wouldn't necessarily say that that makes us ... I mean, the thing about anarchists is that, while we may embrace some of those principles, it's just such a loaded term these days and it's such a poorly understood philosophy that it's kind of like half the people who call themselves anarchists haven't the faintest what that actually means."

Dan: "The mission is larger than one part of the radical community."

That radical community, as it turns out, is a formidable one. MonkeyWrench bills itself as a bookstore, and their inventory reflects that, but they're also a safe house (I truly hope that I'm not blowing anyone's cover here) for the likes of Accion Zapatista, Bikes Not Bombs, Austin Against War, and The Austin Javelina, the alternative to this town's alternative. "We're running out of days of the week to have people have meetings," Hopkins says.

"To some degree, there's a lack of places to do that. You have the university, but there's so much red tape if, for example, you're a university janitorial worker and you're trying to have a union meeting. Sometimes it can be a bit difficult. That's what excited me about it."

It, of course, is MonkeyWrench (named after Edward Abbey's The Monkey Wrench Gang), and it showed up on the scene about five months ago, a refuge for those missing the defunct Conspiracy of Equals Infoshop on San Jacinto (or those missing Seattle and Left Bank or Chicago and Autonomous Zone or Baltimore and Black Planet or Minneapolis and Arise!). On the thriving North Loop, it finds itself among Room Service, the Parlor, Ararat, and Donkey Music, a strip of independently owned and operated businesses that at some point should remind people that the romanticized lost Austin isn't completely so.

"We're really happy to be in this neighborhood, really excited to be able to get this particular storefront, not only because we could afford it -- you know, we didn't actually know what we'd be able to afford because we didn't know if business was gonna be any good or not -- but because it still has some sense of itself as a neighborhood," says the 31-year-old Hopkins, as close to a captain as the store might come. "It's got some character to it, and that's intentional. You can tell from talking to people: There's a reason that this strip doesn't have any chain stores in it ... I mean, we really like that about the neighborhood, and it's a good location. It's relatively close to the university, to students and professors, and it's nice to expose students to something other than the University Co-Op."

At this point it should be mentioned that, among others, controversial UT journalism professor Bob Jensen is in talks with MonkeyWrench to arrange for his students' textbooks to be purchased there by order. It should also be mentioned that when The Daily Texan ran a story on the re-emergence of the North Loop area and MonkeyWrench's role in it, its reporter, Rachel Stone, was given fake names by the store's volunteers. Which is only mentioned because the place has ostensibly come a long way since then.

"The point with us is that we're an extroverted organization," Hopkins explains. "Kind of the problem infoshops and activists have run into -- and we've always thought of ourselves as a bookstore as opposed to an infoshop -- they're not necessarily the most welcoming thing, and we want to make sure that we're welcoming and accessible and that anybody can just walk in the door and feel comfortable browsing around."

It works like this: There are several committees -- Ordering, Space, Fundraising, Accounting, Scheduling, and Volunteer -- comprising the collective, which, as the inner circle, wears the pants in the family. As in, no one wears the pants if the collective doesn't. And it has to be unanimous. No one seemed to be wearing pants for the three weeks leading up to this story, during which I did everything but dance to get someone to admit that the place even existed. It reminded me a lot of my investigative reporting days at Syracuse, except not as fun. Luckily, during the time that I tried to get someone to comment on the record I moved into a house near MonkeyWrench and could stake it out. And luckily, it does exist. And luckily, the collective approved an official meet and greet, which is the primary reason that you're reading this.

But back to those volunteers. I met Hopkins, Lange, Dan, Kai, and Renate, and though there are fluctuating numbers floating around, they indicated that there are about 20 of them. Ranging from 18 to 40, they are the only reason that MonkeyWrench can operate every day and do a brisk -- if specialized -- business while they're at it, because the staff is all-volunteer. They're also why the collective can host movie nights, lectures, live music, bike sales, book clubs, and the like. About half are students (some part-timers or grad students), some are high school dropouts, some have worked at other radical stores, some are in it because, as Hopkins says, "they think it's gonna be exciting." And while working nonprofit retail isn't exactly dumping sugar in a gas tank, the place does seem pretty fun. And they need more volunteers. Always.

"Part of our focus in the beginning was to not be just a little punk rock scene, you know?" Lange explains. "It was really important to get a variety of different backgrounds. In the very beginning there were 30 people talking for three hours at a time. The goal was to reach out to all different types of people, but I don't know how successful that's been." She glances at Hopkins -- a mohawked, bespectacled, lanky fella with a warm smile and an "I'd Rather Be Smashing Imperialism" bumper sticker on his binder -- with a twinkle in her eye.

"All white men with glasses," she laughs.

"The diversity is not as great as we would like it to be," he admits. "It's an ongoing struggle to make it genuinely a thing of the community."

"Obviously, we have made the bookstore our priority, but -- " Lange switches gears.

"It's how we pay our rent," Hopkins interrupts.

"But also, the place gives you something to care about, or be inspired about, or talk about, and want to have events about," Lange says. "And if we didn't have a place to learn about it, a place to read about it, then we wouldn't really have anything to be excited about."

MonkeyWrench Books, "a non-profit, non-hierarchical, all-volunteer, collectively owned & operated radical bookstore," can be found at 110 E. North Loop and can be visited Monday-Thursday, 11am-8pm, and Friday-Sunday, 10am-9pm. They are always in need of volunteers and donations. For more information, or to find out about upcoming events, call 407-6925 or e-mail collective@monkeywrenchboooks.org.