Where They're Coming From 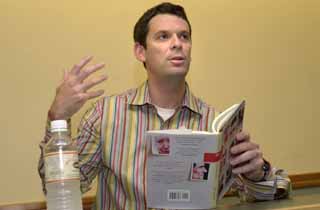 Mark Jude Poirier's reading at BookPeople on May 23 was a deceptively traditional one. Sure, Poirier lives and works part of the year in Archer City, counting Larry McMurtry as his friend and fellow resident, but his fiction defies geographical genre. It is dizzyingly original, a sort of sit-down comedy, sometimes subtle, sometimes flagrant. Poirier excerpted two stories from his new Unsung Heroes of American Industry (Talk Miramax, $22) on this night, "Buttons" and "Pageantry," and the 20-plus audience was stuck in constant giggle, with occasional laughing-cum-coughing fits in between. (Photo By John Anderson)

There's more to the month than the poster. 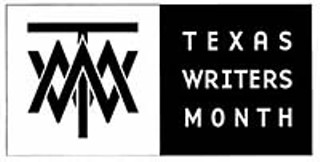 That was 1998, on the eve of the Month's fifth year, and Holland was being quoted by Books Editor Clay Smith about the Poster for a story on the Month and its legacy. Catching a glimpse of the Texas Writers Month poster -- designed by Marc English of Marc English Design, it's always iconic, always classy -- is the closest most Austinites will get to celebrating the 31 days of Lone Star arts & letters, and so it's fitting to note how much it represents in terms of funding and finance, as well as the decentralized nature of Texas Writers Month itself. This is not the Texas Book Festival, which takes place during two days at the Capitol and draws solid statewide attention. This is a bit of an organizational challenge: events here, events there; sponsors here, sponsors there; attendees here, attendees not there. All with a local, home-style feel, at least in the Central Texas sense, all in the course of one month. And so the poster means quite a lot. It's a stamp, a symbol, a ribbon. Quite literally, a logo. 1998's featured Katherine Anne Porter, and 2002's features Liz Carpenter. The latter was fêted at Barnes & Noble Westlake on May 23, with the likes of Kinky Friedman and Cactus Pryor by her side, for "Liz Carpenter: This Is Your Life." Very wonderful stuff. But Holland's right: Texas Writers Month is more than the poster. That might seem obvious, but it was never better demonstrated than this year, when Texas literature was less a genre than a starting point, less eccentric than eclectic. Sponsors like BookPeople and Barnes & Noble were intent on convincing people to come -- not everyone is aware just how rare it is to even have a state-sanctioned writers month, or they just might not care -- and people did, for the most part. An average of 30-plus for the events I attended, actually, which would make some local bands blush. Here, then, are the highlights of the monthlong salute to the W in TWM.

Early on during what was no doubt the first big -- and perhaps biggest -- event of 2002's Texas Writers Month, a middle-aged woman wearing some kind of tennis dress and clutching a basket filled with something other than books whispered to a BookPeople clerk, "What's going on here?" She glanced toward the crowd of at least 100 -- themselves clutching heavy, reddish books -- stretching 10 deep from Kids to Women's Studies on the store's second floor, with a good number spilling over onto the stairs. "Robert Caro, the LBJ guy," the clerk whispered back. "Oh, my goodness," she said. "I've read about this guy." The guy himself held court for about an hour, his New York accent and self-deprecating sense of humor skipping rope with his formidable knowledge of that most formidable president. "This has become something more than I intended," he said of The Years of Lyndon Johnson, the third volume of which, Master of the Senate (Knopf, $35), hit shelves with a particularly sweet, successful sound on April 23. "Though I did not set out just to tell the story of a famous man," Caro -- "never a very good history student" -- primarily discussed Johnson's "unprecedented rise to power. The question I wanted to ask was, how did he do it? ... He was looking for power in places where no one was able to find it before." When it came time for questions, the audience acted as if it were a wake, trading old stories and prodding the biographer for more, much as Sam Houston (University of Oklahoma Press, $39.95) author James Haley's would 10 days later during his BookPeople appearance, which was taped by C-Span's BookTV. Caro -- now a celebrity in his own right and dressed like a rather classy game show host -- played along. "Some of us are aging," one fan joked about the 12 years between Master of the Senate and its predecessor. "Are we going to get to see volume four?" The 66-year-old chuckled and nodded. "Well, I certainly hope so."

It has been 108 years since O. Henry published "The Bexar Scrip 2692" -- not a one-off attempt at sci-fi, but a disturbing battle between good and evil nonetheless -- in his Austin newspaper The Rolling Stone. The O. Henry Museum, in conjunction with the Sisters in Crime-Heart of Texas Chapter and the Parks and Recreation Department, presented a reading of the neglected but often cited early work at the gaudy Capitol Visitors Center, once the stately General Land Office. The GLO serves as the setting for the story, in which a wealthy, reputable land agent named Sharp does everything in his power to "rob a widow and her son of property soon to be of great value." Stage actor and St. Edward's professor Ev Lunning Jr.'s career includes portrayals of O. Henry himself, Martin Luther, and Huey Long, but on this night he looked and sounded more like a huskier Tom Skerritt, and read wonderfully the tale of woeful suspense. He was then given a framed reproduction of the illustrated first page of "The Gift of the Magi," a copy of the new and locally published Austin Stories by O. Henry (Nortex, $10), and its accompanying audio-book CD, which features Ev Lunning Jr. "The other stories are just as spooky as this one!" said Dr. Vi Marie Taylor of the Friends of the O. Henry Museum. "I know that!" replied Ev Lunning Jr.

"Bitterness doesn't really lead to anything profitable," explained Christopher Cook at Barnes & Noble Westlake. "But getting through there and exploring the anger can be useful." And later: "I believe will is a thing you can develop, like a muscle." Judging from what they were hearing, curious passersby stopped and sat down to join in on what was ostensibly a chat with a noteworthy self-help author. But Cook is not a self-help author. He is, however, the author of the critically acclaimed Robbers (2001) and of Screen Door Jesus and Other Stories (Host Publications, $15). See what happens when a book club that has just finished reading your work is part of the audience you suggest "should just ask some questions?" Things get a little weird. But that's better than the alternative: At 7pm -- the scheduled start time for a reading in which Cook read nothing -- there were roughly two people present and, had it remained that way, it would've been quite a shame considering how interesting he and his output are. Instead, about 25 people eventually showed up, as Cook (who works most of the year in Prague but grew up Pentecostal in East Texas) dodged "What did that mean and did it really happen?" questions while waxing about his writing regimen and the "Altman-esque" adaptation of Screen Door Jesus, which starts shooting around Central Texas in late summer/early fall. While that project is "one of those where they want the writer to go away," Cook said, the filmmakers might regret it. His prose is some of the most lyrically complex stuff out there, dense and delicate, earnest yet insightful.

The experience created for those in attendance at the Austin Scottish Rite Theatre on May 10 was rather complex stuff itself, though I'm not sure it was intended quite as it turned out. Act I of the program that would culminate in a performance of Border Radio (see "Borderline Vaudeville," May 10, austinchronicle.com/issues/dispatch/2002-05-10/music_feature.html) was a panel called "Backstory," and was meant to illuminate the career pathways chosen by the likes of such Texas institutions as Bud Shrake (Billy Boy), H.W. Brands (The First American: The Life and Times of Benjamin Franklin), David Lindsey (Animosity), Mark Busby (Fort Benning Blues), and Sarah Bird (The Yokota Officers Club). But Bird was absent -- "running late, I'm sure," said moderator Busby -- and the conversation between the four fellas, while spirited and interesting, could've benefited from a woman's touch, perspective, and wit. They almost got it; Busby at one point indicated that Bird was backstage, the catch being that it was David Marion Wilkinson backstage, dragged up to look like her. What followed -- parody, sex jokes stemming from Bird's romance-novelist career, etc. -- was often funny but beyond bizarre, causing about a third of those assembled to leave and not return. Turns out Bird had other obligations and had indicated this to organizers. But her no-show and Wilkinson's parody might have been fine if not for an awkward, overreaching effort of the organizers (in this case, the well-intentioned Barnes & Noble and UT Press): What had started as a chance to debut Border Radio -- an admittedly unorthodox TWM event but a show written and performed by writers, after all -- had turned into a literary Mass. Trying too hard, trying to please too many facets of the arts & letters community at one time? Maybe. There was definitely an air of blockbustery aspiration, a sense of justifying the main attraction. Which, by the way, was eerie and a little bit frightening.

What authors Bill Crawford and Gene Fowler have done with their research on the unregulated radio stations that blasted their signals from across the Rio Grande into the homes of the Midwest and beyond -- carrying country & western, medical quacks, and religious zealots -- from the Thirties into the Sixties is an overwhelming but educational spectacle. Backed by a guitar, accordion, and stand-up bass, the production combined still projections, ghostly pale green lighting, séance-like performances, and slapstick to illustrate in live action the tale Crawford and Fowler tell in their Border Radio: Quacks, Yodelers, Pitchmen, Psychics, and Other Amazing Broadcasters of the American Airwaves (UT Press, $22.95). And the players -- including writer-director Sidney Brammer as a twangy-voiced Earline Hurley, Tex-Mex musician Joe King Carrasco in a surreal turn as a swami, writer-director Amparo Garcia-Crow as tragic songstress Delia Del Rey (though those were just their primary roles) -- certainly brought the burlesque.