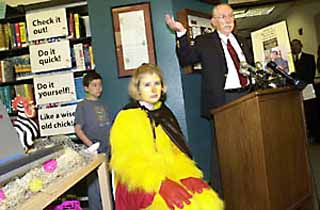 Becky Marek, sitting next to Mayor Gus Garcia, is an administrative assistant at the Hampton branch who agreed to dress up as a chicken to promote the branch's "Chick It Out" campaign, designed to publicize the new computerized system at the Hampton branch that allows patrons to check out their own library books. (Photo By John Anderson)

On Monday afternoon, Mayor Gus Garcia was at the Will Hampton branch of the Austin Public Library (APL) giving a press conference about the new Mayor's Book Club. Like Seattle, Chicago, and New York, among others, Austin now has a citywide reading program. "A child who learns how to read learns how to do everything else," the mayor said after he revealed that the first book chosen in what is scheduled to become an annual read-a-thon in Austin is Rudolfo Anaya's Bless Me, Ultima (1972). The mayor then read from a press release to explain the reason the Library staff chose Anaya's first novel: Bless Me, Ultima is an examination of "how we respond to familial and cultural change, how we hold to innocence and hope in the face of disillusioning experience, how we explain the presence of evil in the world, and what spiritual understandings and comforts can help us cope with the presence of evil." It is also set in the Southwest, is available in both English and Spanish, and is easily accessible in paperback. The Library administration has stocked its branches with extra copies of the novel, which is about a boy in rural New Mexico who is forced to reconcile his own desires with those his parents have already foisted on him at the young age of 7. APL will be working with UT's Humanities Institute to sponsor book discussion groups and get Austin readers turned on to a classic coming-of-age novel that's more than a little mystical. After the mayor was through speaking, Humanities Institute Director Evan Carton explained that the Institute, which opened in 2001, was designed to bring "the life of the mind into the public sphere" and that the "motto" of the Institute is the "citizen-scholar." The Library has asked Anaya, who received the National Medal of Arts in 2001, to come to Austin in October to discuss the book.

Austin is a popular place for public reading programs. In April, Texas Writers Month organizers announced that during Texas Writers Month, which is May, Texans should consider reading Larry McMurtry's Lonesome Dove if they are adults and Old Yeller if they are children. Deborah Hamilton Lynne is a local playwright (Afterlives, E Pluribus Unum: Barbara Jordan, One Voice) who is spearheading much of the behind-the-scenes work that is required to mount a monthlong production of events like Texas Writers Month. "A lot of our events for Texas Writers Month, the only people who are there are the writers!" she told the Chronicle last month. "And I wanted to involve the readers as well as the writers, because why be a writer if you don't have readers?" she sensibly pointed out as she explained that "we tried to pick something that wouldn't particularly be controversial." Some cities' discussions about which book should be picked have been characterized by fractious disagreements, namely New York. Book discussion groups are in the works for both of the public reading programs; we'll publish details once they become available.