Literary inmate Vanessa Leggett on how she endured her imprisonment, and what she'll do with her freedom 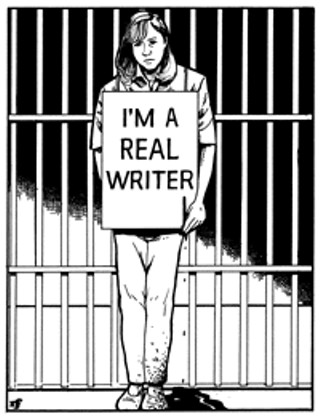 Vanessa Leggett and I were supposed to talk at seven on a recent Sunday night about her five and a half months in federal jail. She had refused to reveal her confidential sources in a federal murder investigation against former River Oaks bookie Robert Angleton, accused of ordering the death of his socialite wife. Vanessa's incarceration drew international attention as she snatched the record for the longest contempt of court imprisonment of a journalist in United States history.

On Monday, June 16, 2001, Vanessa and I had had lunch in Houston as I begged her to help me with some research on a true crime book I was working on about the case of Andrea Yates, whose trial for murdering her five children began this week. Vanessa gave me a few tips, then spoke of how she hadn't eaten or slept in days, only cried, as she feared she was going to be jailed for refusing to cooperate with the grand jury, despite having previously helped the federal investigators. I said, "Oh, Vanessa, don't worry. They're only bluffing."

Six and a half months later, she phoned me at 7:07pm and said, "I got stuck in the grocery store. Can you call me at 7:30?" Vanessa's life would seem to be back to normal, except for the fact that when she was freed, a spokeswoman for the U.S. attorney's office refused to comment on whether the government planned to convene another grand jury or ask her for her notes again. In either case, Vanessa could be returned to jail if she doesn't cough up what she knows. She expects to be subpoenaed by the prosecution to testify against Robert Angleton in his federal murder trial. Last week, she signed with Suzanne Gluck, a literary agent with the William Morris Agency.

You were at the grocery store a while ago. Is your life back to normal?

Vanessa Leggett: Yes, it is, for the most part. You know, I was in the coffee section and I saw a mural at Central Market that was written on the wall that I remember seeing in July of last year, which was the last time I went to Central Market. It was a quote from Nancy Reagan that said, "Women are like teabags. You never know how strong they are until you put them in hot water." I remember seeing that last summer right before all this happened, and seeing it again tonight was kind of strange.

AC: What'd you have to eat while you were in jail?

VL: Oh, gosh, um, jail food. It's varied day to day but it was a tray with an entrée with some meat or pasta, uh, lots of pasta, lots of spaghetti, lots of carbohydrates and sodium.

AC: The reason I ask is because all the people I talk to tell me how horrible the food is.

AC: So what was the worst thing about the five and a half months?

VL: Just the absence of freedom, virtually no movement, just you will be restricted to an institution. If anyone has ever stayed in a hospital for any length of time, especially as a patient, it's a feeling of helplessness and hopelessness. And every day is like the day before. The greatest loss I thought was just the loss of freedom.

AC: What did you read?

VL: I read just about everything. I read a lot of crime fiction. I read books on writing. I read one book that was recommended to me by one of Roger Angleton's former employers that was very interesting.

AC: What was that?

VL: It's called What Makes Sammy Run? This man was Roger Angleton's first boss up in New Jersey years ago ... and this man that I interviewed suggested that book because he said the man in the book reminded him of Roger Angleton ... and if I read the book I would understand how Roger was as a young man.

AC: So in essence, you were still doing research in there?

AC: Did you ever feel afraid?

VL: Yes, I did. Not in the sense that most people would identify fear in a prison way. I did not really fear for my life while I was there, but I feared some of the people around me. And not necessarily inmates.

VL: Yeah. [And she becomes silent.]

AC: What did you fear about them?

VL: Not that they would physically harm me, but I guess it was not so much fear but lack of trust. You know, they would try to ingratiate themselves with you, and that, uh, just wasn't something I welcomed.

AC: Who was the most interesting person you met?

VL: Frankly, no one was that interesting. They all had a story, like all of us, but I wouldn't say that any of them was particularly fascinating.

AC: What got you to writing?

VL: When I was in graduate school, and a murder took place in Houston that I was interested in -- some professor I had encouraged me to write -- and I just thought, why not? Why couldn't I write a book about this crime?

AC: What do you think makes a writer?

AC: What makes a journalist?

VL: No one has been able to come up with a definition. I hear it's going to be something like the definition of pornography -- you'll know it when you see it. I really like the definition -- actually the one that a writer for The Austin Chronicle mentioned, I think it was Michael Ventura in his open letter to me: a journalist is someone who keeps a record of the day (www.austinchronicle.com/issues/dispatch/2001-08-31/cols_ventura.html ). And my definition is, I guess, anyone who tries to disseminate information to the public. That definition is difficult. I guess the only thing that I'm certain about is that I don't want the government to define who a journalist is.

AC: Speaking of that, the court administrators who are doling out the credentials for the Andrea Yates trial are saying they have problems with freelancers covering the trial. And they have told my attorneys that freelancers are not legit media. Can you comment on that?

VL: I think it's ridiculous. I think freelancers should have just as much of a right to the information as anyone else. And I don't think they necessarily need a track record to claim that right. I think it was Matt Drudge, who is the cyber-gossip out there who has the Drudge Report, and I believe that he broke the Lewinsky story, which was a major watershed story. And I don't think he had published anything before he created his own Web site. Yet, he had a means to get the information to people quickly.

Can you imagine if the government had issued a kitchen sink subpoena to those journalism students like they did to me, for any and all records of those students' findings, do you think those people would be on death row still? I do.

AC: Speaking of that, the kitchen sink subpoena, when do you think a journalist or a writer should turn over his or her notes to law enforcement, prosecutors, judges, even defense attorneys?

VL: I think that journalists should try to preserve as much as possible their sources and their work product. However, here's the deal: It gets down to competing interests that the public has. The public has an interest in free speech and free press, definitely. The public has an equal interest in effective law enforcement. There should be a balancing of these interests. And if the government can show that they're not able to get this information from another source, and it is material to their investigation, and they are specific in what information they are seeking, then I think in some cases journalists would have to give up that information.

AC: Going back to the jail thing, what would you say got you through it? How did you survive it? Was it an inner core?

VL: Yeah, I think it was. I think it was just believing that I was doing the right thing, and those letters that people wrote really helped me enforce that. I knew I wasn't really in there alone. I knew that there were a lot of people behind me, and that really helped get me through it -- because it wasn't just about me. It wasn't just about my work product. It was about the First Amendment and the public's right to a free press. And knowing that it was worth something much greater than my own liberty, made it easier for me to endure the time there.

AC: If another writer's faced with jail, what would you advise them?

VL: I have plenty of advice for before going to jail.

AC: Okay, what's the advice for before going to jail, tell me please.

VL: Well, for freelancers, who I think arguably -- because of what's happened to me, and certainly a negative precedent being set, the future may not look very bright for freelancers -- I think that freelancers need to establish their intent to disseminate their information to the public, to build some sort of record that that is what they're trying to do. They can either get it to the public, because that's the best proof, or can lay the groundwork where you can demonstrate to the court that you were intending to get this information to the public.