'A Death in Texas' pulls the James Byrd Jr. murder out of the east Texas woods 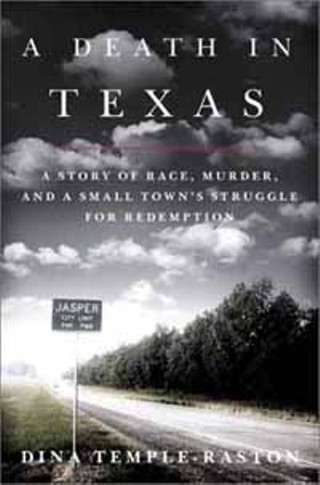 A Death in Texas author Dina Temple-Raston will be at BookPeople on Friday, February 1, at 7pm.

Near the end of A Death in Texas (Holt, $26), an account of the dragging death of James Byrd Jr. and its aftermath, first-time author Dina Temple-Raston trots out William Faulkner's canonical observation that in the South, the past isn't dead; it's not even past. You can bemoan the blight of social fragmentation until you're blue in the face, but there's an idea we can all relate to. The savage past, and the ways it bleeds into the present, is what Temple-Raston, who has subtitled her book A Story of Race, Murder, and a Small Town's Struggle for Redemption, is after.

When President Clinton came to Austin in May 1999, he said, "For me, as a white Southerner, the thought that a man could be murdered because of his race in 1999 is heartbreaking." "Heartbreaking" is an apt description of the entire tragedy recounted in this notably well-reported book. It's worth mentioning, though, that Clinton is the only person quoted in A Death in Texas who voices that old canard that modernity has so far removed us from the injustices of the past that it's a surprise when they resurface. Jasper residents were appalled after they learned what had happened to James Byrd, but no one from there is quoted as saying anything like what the President said. Compared to him, they seem more resigned, or resistant.

James Byrd's murder was vicious, even by East Texas standards. Byrd had been drinking with friends on the night of Saturday, June 6, 1998, when he decided to walk toward home via Martin Luther King Boulevard. "You watch. James Byrd, he's going out in style. The name James Byrd is going to be on everybody's lips," he said, strangely enough, before he left. If he had accepted a friend's offer to give him a ride, he probably would have arrived home safely, but, as Temple-Raston writes in classic true-crime fashion, "He was having fun.

He was always trying to have a good time."

Earlier that night, Bill King and Russell Brewer, two ex-convicts who sort of drifted together in prison because neither of them were in a gang, met up with Shawn Berry, the manager of the Twin Cinemas downtown. Berry's girlfriend was also there, trying to reconcile with him after a fight they had had, and he told her he was going to bed early but ended up driving around with his two friends. Berry turned his gray sidestep truck onto Martin Luther King Boulevard and offered Byrd a ride that ended, for Byrd, on deserted Huff Creek Road. "Berry handed him a beer through the window," Temple-Raston writes.

The truck lurched back up onto the road and headed for the woods on the far side of town. James Byrd must have been dimly aware, just for a moment, that he lived in the other direction. But in small Texas towns where there was little to do, speeding down country roads with a cooler of liquor was as good a diversion as any.

One of the reasons Guy James Gray, the district attorney in Jasper, was able to procure the death penalty for King and Brewer (and a life sentence for Berry), was the pathologist's testimony that even though Byrd was savagely beaten before he was chained to the truck, he had been conscious while he was dragged. "The flavor of those particular ashes," as Joan Didion wrote, is hard to keep down.

Despite the author's weird stranglehold on the past tense -- "The prison was vital to the economy of Huntsville, and over the years residents had come to take a perverse pride in the place," she writes, as if those things are no longer true of Huntsville -- the narrative in A Death in Texas has all the gripping expediency of a good mass market true crime book. Temple-Raston didn't spend four months living in Jasper just to tell the blood tale, though. She's a producer at CNN-FN in New York and was a White House reporter for Bloomberg Business News.

From that extended course of study, one presumes, she learned how to cobble this story together with real thought and suave unpredictability. One minute you're reading about Bill King being transported, in the perfect final irony, to the coincidentally named James Byrd diagnostic unit in Huntsville, where death row inmates are processed upon arrival, and then, to explain the final rites Bill King will experience when he is executed, you're reading about the last days of Cruthers Alexander, who was the first person put to death after Governor Bush took office. There is the thrilling sense that nothing has escaped Temple-Raston in her pursuit of the story, and she tells it with panache.

Jasperites apparently came to trust her, which is why there is a pervasive investigation here into the town's image of itself. With hordes of nosy journalists probing them, Jasper residents learned to put on their media faces in order to bolster themselves and their town, which, in addition to the Byrd murder, was suffering from a 15% unemployment rate. Many of the town's white residents stressed that the murder was a sociopathic aberration and that that kind of cruelty wasn't bred in Jasper. The author's reminders that Jasperites did not want to be presented as country hicks on national television is hardly a revelation, but Temple-Raston has dug deep: "When the Jasper County Courthouse was built in 1889, locals scoffed at the unnecessary extravagance of constructing it entirely of brick. County officials had wanted a modern, serious-looking building, so they added every accouterment to show that Jasper wasn't so country as not to know how to build a proper courthouse."

Trying not to be so country: That's one East Texas story. Sheriff Billy Rowles is another. He's the born-again hero of A Death in Texas as he fumbles, immediately after the murder, by reading a statement to the press that was scripted by the FBI and which he didn't articulate very well. A man who quietly controlled his jurisdiction, he was thrown into a tailspin by the Byrd murder and could no longer glean the crucial local news from his fellow law enforcement peers during collegial breakfasts of biscuits and gravy at the Ramada Inn on Highway 190. But as the Byrd murder began to envelop Jasper, Rowles began to stand again on steady ground. When the New Black Panther Party and the KKK both insisted on protesting in Jasper at the same time, he let them, but precipitously got the KKK out of town by shutting down the P.A. system a KKK organizer was using. After the media left town, people began putting bumper stickers on their car that read, "Thank you Billy Rowles, for being our sheriff."

Temple-Raston isn't content to make her sometimes harsh assessments of Jasper without historical imperative. In one of her smart discoveries that make you wish this book was longer than it is, she reminds us that when the negotiations for the Louisiana Purchase were being conducted, the United States and Spain failed to demarcate the new western boundary of the U.S. The two nations agreed that the land on both sides of the Sabine River, which now separates Texas from Louisiana, would become neutral territory "The area became ... a safe haven for murderers, rapists, thieves, and fugitives from authority," she writes. "Most Texans said East Texas wasn't really Texas. Residents behind 'the pine curtain' had failed to come out of the woods during the great westward movement. They were, people in Houston said, different."

A Death in Texas: A Story of Race, Murder, and a Small Town's Struggle for Redemption