Is Updike's enthusiasm for Wagner warranted? 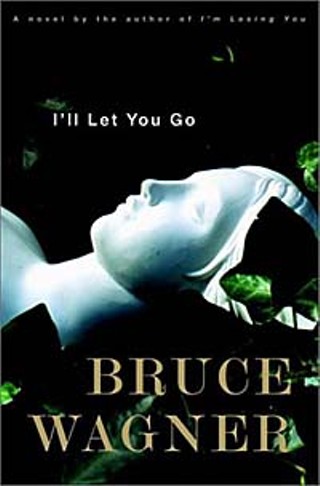 There is an informal tradition in American letters that allows a literary writer to pump up a genre writer. Eudora Welty blurbed Ross MacDonald; Norman Mailer praised Neal Gaiman; and John Updike plucked Bruce Wagner from West Coast regionalism because he wrote I'm Losing You, his previous L.A. novel, "like a wizard." In the biz-o-lect, it is a "win-win" proposition: The genre writer nabs some cachet that he or she can go to lunch on, and the literary writer features himself outside of the study (where we know he is struggling with the Kalevala in the original Finnish, after an afternoon of writing his dense, textured masterpieces) and basically shows an awed audience that he's just the regular Joe who'll sometimes watch TV or pick through the latest Victoria's Secret catalog like you and me, hypocrite lecteur.

Updike's enthusiasm notwithstanding, Wagner's prose in I'll Let You Go (Villard, $25.95), his new, longish rags-n-riches novel, doesn't rise to the level of magic, unless the Wizard Updike was thinking of was the one in Oz. The story revolves around the doings of the upper .01% of the income scale contrasted with the doings of the dead bottom of it. We are in Southern California, where the .01% lives in homes described like this: "The interior of the Wallace Neff-designed estate, built for a silent-film director in the twenties ..." The dregs live in more ad hoc shelters, like this: "He lived in a great box on which he'd painstakingly drawn a colorful woodsy scene." Or this: "The room was cool and empty. A rag on the floor proved on closer examination to be a rat."

The .01s here are the Trotter family, a classically neurotic bunch. Wagner is usually very prescient about the rich, but in this novel he makes the mistake of giving the leads to the precocious Trotter children: Toulouse and his cousins, Lucy and Edward. Edward is a prodigy with a crippling disease that is bound to strike him down before the book ends. Lucy wants to be a writer, a desire that sets the characters in motion when she tells Toulouse, or Tull, that his father isn't really dead, a fact she'd dug up from trying to write a novel about the family. That Tull's mother, Trina, has lied to him, shouldn't surprise the 14-year-old. When Trina is not fashioning world-renowned landscape design, she spends much of her vast amounts of time cycling into and out of rehab places. In other words, these are the fabulous people. But Wagner's idea of describing them as if they shimmered with fairy tale dust, and his inability to resist the maudlin possibilities of rich kids suffering while making clever repartee (like some munchkin version of the Algonquin Round Table) makes these sections of the book unbearably precious.

Wagner is much better about the very poor. With them, he drops the Walter Neff business of name dropping, or at least drops names that are more salient: Haldol, Dexedrine, Risperdol, drugs of choice for the zombification of the underclass. Wagner's wrong-side-of-the-tracks plot line goes like this: A homeless man named Will'm tries to help a girl, Amaryllis, escape from the police when her mother, a crack whore, is found sodomized and strangled in her crappy apartment. Will'm, we come to suspect, is the key to the mystery of Toulouse's missing father. Story aside, this is where the action is in this novel. When Will'm goes through the paces of street life, with its underpass crannies and temporary shelters, or Amaryllis struggles to get out of the debasing Gulag of social services, Wagner's prose does indeed rise to its promised wizardly virtuosity. It makes one wish that Wagner had taken a tip from California cuisine; he should've cut down on the rich crème.