Edmund Morris was spanked by critics in 1999 for introducing a fictional contemporary of Ronald Reagan's in Dutch to help explain the trajectory of that president's life. Now the second volume of Morris' study of Theodore Roosevelt has been published, and it's apparent all over again why he is one of the nation's best biographers. During a national crisis, we like to gather 'round and listen to stories about our noble forefathers. That, at least, is how many observers explain the popularity this year of David McCullough's John Adams and Theodore Rex (Random House, $35), Edmund Morris' new second installment in his planned three-volume study of Theodore Roosevelt. But the little man who lives on my left shoulder and always tells me who's not wearing underwear doesn't think that's the reason. John Adams started flying off shelves long before September 11 and, in any event, McCullough, who also wrote Truman, has a gift for elegantly prodding the nation into revery over his biographical subjects, whenever he publishes. Roosevelt doesn't seem suited for nostalgia, even given the coincidence that Theodore Rex, which opens with young President Roosevelt assuming the presidency because a terrorist assassinated his predecessor, is being published when the nation is particularly mindful about terrorism. Even though, as Morris writes, Roosevelt "felt at home with conservatives" and "owed his political advancement" to them, he is too restless, bearish, and reform-minded to entomb with nostalgia. No, the reason we're celebrating two great presidents this year is because the two books about them are well-written, moving, and alive.

Take the prologue to Theodore Rex. In 40 pages, Morris manages to move Roosevelt merely from the top of Mount Marcy, in the Adirondacks, where he was on vacation with his family when he found out that President McKinley was dying, to Washington, D.C. But he presents the entire scope of what the new president would have to face in a fascinating and intimate barrage of constant, constant motion that re-creates what it was like to become the president so suddenly and what it was like to be around the fitful Roosevelt. Roosevelt always felt that he would be president one day, and Morris quotes a panoply of people who felt that way, too. "Less fatalistic" people, Morris observes, saw the zigzags in his career, "like that of a bee smacking against many surfaces before buzzing into the open air." Writing about Roosevelt's impromptu swearing-in, he describes Roosevelt as "a boy trapped in school." Morris' authority is intimate and enthralling.

He isn't a historian, or even, really, a presidential biographer, even though he was famously spanked by critics for 1999's Dutch, in which he introduced a fictional contemporary of Ronald Reagan's to help explain the trajectory of that president's life. He's a writer who happens to write about presidents. "Historians tend to be interested in large social movements and institutions and economics and all these things which are not my territory," he said last week in an interview with the Chronicle. "I like human character, character in action." 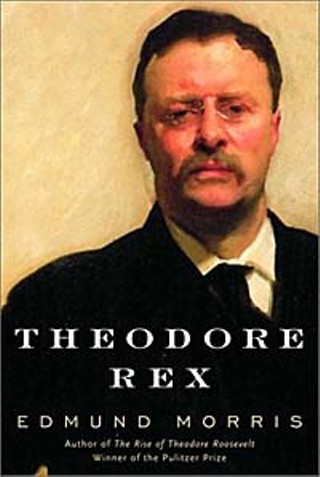 Austin Chronicle: You said during another interview that one reason you don't use a fictional narrator in writing about Roosevelt is that he fills the page and doesn't need any interpretation. What was it about Reagan that required that narrative device?

Edmund Morris: Well, Reagan was a performer. And performers can only be understood in terms of performance and how audiences react to them. If you were interviewing Ronald Reagan, even though he was the president of the United States and the strongest man in the world, you would have been bored. There would have been nothing there. But as soon as there were two or three other people in the room, suddenly he became a performer. He had an audience and he was magical, and to write about a person like that, then, the biographer has to perform the function of the audience, watching him in action. Now, T.R. doesn't need that.

AC: But wasn't Roosevelt a performer?

EM: Oh yes, he knew how to dramatize himself. There was always that moment when he came into a room and he would hesitate. Someone once compared it to the way a pointer in hunting will stand stock-still and electrify everybody. T.R. always did that when he came into a room, got the attention of everybody, and this little electric shock went around the room. But he was intellectual enough to understand that no leader can prevail without theatre. The president's character can illuminate and dramatize public issues which otherwise might seem rather dry.

AC: Like Bush, Roosevelt had to battle terrorism. Could you just talk a bit about how he handled that situation?

EM: McKinley was the third president to be assassinated in 36 years. And he was a very popular president, and when he died -- shot this time not by a crazed person but by a very calculating anarchist, a political ideologue -- it made the American institution seem terribly vulnerable. ... Roosevelt had to combat it, as a new young president, by expressing the moral outrage of the American people against anarchism in language which was so resolute and so strong and so simple that it could not possibly be misunderstood. And he forecast very presciently that if ever anarchy is triumphant in the United States or around the world, it will lead to a "red night of despotism." So that single phrase telegraphed the fact to the world that we had a writer and a thinker in the White House.