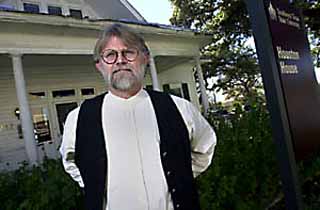 Writer and SWT professor Mark Busby will direct the Southwest Regional Humanities Center at SWT with a grant from the National Endowment for the Humanities. (Photo By John Anderson)

Two years ago, Mark Busby was looking forward to the day his Center for the Study of the Southwest at Southwest Texas State might receive $5 million from the National Endowment for the Humanities. Under the leadership of former NEH chairman William Ferris, a folklorist and Clinton appointee who had been the founding director of the Center for the Study of Southern Culture at the University of Mississippi, the NEH was to fund 10 Regional Humanities Centers spread across the nation to encourage Americans "to explore local history, rediscover their roots and learn how their 'sense of place' influences identity." SWT applied to host one of those centers. UT also applied but SWT has concentrated on regional studies to a degree that UT has not. "It's the kind of institution that these regional centers are going to be increasingly known for," Ferris, who left the NEH when his term was up in November, told me recently. "They work with teachers, they're involved in the grassroots culture of the Southwest, and each of these centers has a similar kind of mission within their regions," he says. "Across the nation we now have these institutions charged with protecting and studying the grassroots culture of each part of our country and that's something that Texans believe very deeply in. There's a long and rich tradition of studying the traditions of Texas and especially the folklore worlds of the Lomaxes and others, who pioneered that work."

The centers are intended to serve as "cultural hubs" that will develop undergraduate and master's programs in regional studies, encourage documentation and preservation of regional history, collaborate with K-12 teachers and school systems, design programming for public audiences, and develop resources for cultural heritage tourism. The NEH was going to provide $50 million with the understanding that each of the 10 universities selected to host one of the centers would raise $15 million on their own to create a sizable endowment to support the centers. Among Busby's plans for the Southwest Regional Humanities Center was the idea that students could take courses in San Marcos, Austin, Albuquerque, Las Vegas, and Tempe, and he garnered "letters of support," a necessary step in the peer review process required to receive funds from the NEH, from the president of the University of Texas, the president of Texas A&M, and the director of the Arizona Humanities Council, among many others. (In the NEH's geographical division of the nation, the Southwest encompasses Texas, New Mexico, Arizona, and Nevada.)

Busby recently received word that SWT beat out the other university that was in the running to host the Southwest Regional Humanities Center, Arizona State University in Tempe. But that great $5 million pie in the sky, which had professors across the nation scrambling to define their sense of place to the NEH, has now dwindled to the size of a tart. The eight regional humanities centers that passed the peer review process will still serve as cultural hubs, but now they're receiving $378,900 instead of $5 million; each university will triple the $378,900 allocation to create a $1,515,600 endowment per center. "What we said we were going to do was create this endowment that we would use to give grants to regional humanities entities throughout the four-state region," Busby says. "And we're not going to have that much money to do that many grants, so we'll probably have to do initiatives on our own ... and do a lot less than we said we were going to do."

Exactly how a $5 million heap of money became $378,900 is a question that has no single satisfactory answer. In June, National Public Radio's Bob Edwards interviewed Ferris, who was criticized by some commentators for his populist approach and his interest in topics like Elvis and the blues. Edwards asked Ferris about his 4-year tenure at the NEH and why he thought regional studies is such an important thing for the federal government to foster. "You are no snob about popular culture," Edwards said. "I've seen your Elvis impression. And yet, it seems [that popular culture] is more of an obsession each day with the general public." Ferris replied:

I think, you know, in looking back on the 20th century we have to look at popular culture as part of a religious phenomenon in the sense that people make pilgrimages to Graceland, and they collect relics such as pictures and artifacts that reflect the music and life of a figure like Elvis Presley. And while to some academics it may seem laughable, it's a very significant presence. And popular culture, in general, to the world is what America has created in this century. It has dominated through film and records and all sorts of entertainment, the media, what the world listens to and how it thinks. So we ignore that at our peril. It's as though we are swimming in a deep sea, and not paying attention to the water in which we're swimming.

But in January, George Will wrote a column in The Washington Post that took Ferris and Ivey to task because they are folklorists, and thus, in Will's estimation, have a lack of concern for quality research in the humanities and arts:

It is not mere coincidence that both Ivey, former head of the Country Music Foundation, and the head of the National Endowment for the Humanities, William Ferris, are folklorists. Talk about a capacious category -- what cannot be swept into the domain of "folklore"? Three years ago the NEA endorsed the idea that "art includes the expressive behaviors of ordinary people," including "dinner-table arrangements" and "playtime activities" and "work practices." That is, everything.

"In many ways, it seems like the regional centers ought to be something that Republicans would support because it's taking things back to a local area," Busby says. In fact, they did. Ferris had the support of Mississippi senators Trent Lott and Thad Cochran and even Jesse Helms, among others. Lott and Cochran sent a letter to President Bush suggesting that he should retain Ferris as the NEH chairman. "But because of the sense that there has been this straying from traditional education," Busby continues, "I think it sort of got Ferris' initiatives sidetracked."

Mary Lou Beatty, the acting director of public affairs at the NEH, says that by the time Ferris had left the NEH, $2.7 million of the hoped-for $50 million had been raised. Two and a half million of the $2.7 million was donated by the Knight Foundation, the single largest donation given to the NEH by an organization in the private sector. The Clinton administration vigorously encouraged federal agencies like the NEH to seek out private dollars, and Ferris and Bill Ivey, the former director of the National Endowment for the Arts, vigorously pursued them, though federal funding is still the lifeblood of the agencies.

Although chairmen of agencies like the NEH and NEA serve 4-year terms, Ferris had expressed an interest in staying on during the Bush administration. This summer, though, Bruce Cole, a more traditional scholar -- a former art and literature professor at Indiana University and a well-known expert on the Italian Renaissance -- was nominated by President Bush to head up the NEH and has been confirmed by the Senate. The new NEH administration could have continued to raise funds for the Regional Humanities Centers, but will move on to other initiatives.

"The problem is just the lack of support for the humanities," Ferris says. "When I first came to the NEH, I was told by a friend not to forget that you will never get everything you want. You aim high and you get a part of what you hoped to get. I think in the context of that picture we got a significant amount, both private and federal dollars, for this. And I think the main point, and it's a positive one, is that the centers have been launched."