Taking stock of this year's panels and readings 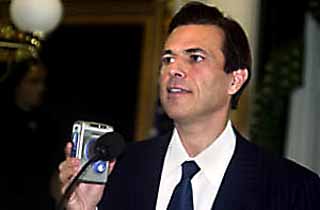 Tom Wolfe flew from New York to say some kind, memorable things about his old friend William Goetzmann, the noted UT professor and Western historian who received the Texas Book Festival's lifetime achievement award, the Bookend Award (which famed merchant Stanley Marcus also received). The gamble that the Festival made by featuring some panel discussions that weren't necessarily about books paid off, if the "Stories in Song" Texas Songwriters' panel with Shawn Colvin, Joe Ely, Butch Hancock, and Jimmie Dale Gilmore is any indication. The news, though, was happening down in the trenches, where it usually does. Today's "My First Time: First Novels" panel took place on the bottom floor of the Capitol Extension, in one of those meeting rooms seemingly designed to elude detection by the infrequent Capitol visitor. Had you scripted it yourself, you still couldn't have devised a better encapsulation of the nature of the Book Festival -- which is to gather the state's and the nation's literary talent and mix it all together in a dizzying two days -- than this slightly ragtag crew of writers excellently poked, prodded, and caressed by novelist Edward Swift, an East Texas native but New York resident. With five first novelists ranging in age from their 20s into ages I'm not even going to guess at, the panelists didn't have much in common with one another except their newfound status, which, of course, is what made this panel sexy and packed.

Dallas resident Caroline Rose Hunt was inducted into the Texas Business Hall of Fame in 1999; she's the founder of Rosewood Hotels & Resorts, a luxury hotel group, and the author of Primrose Past: The 1848 Journal of Young Lady Primrose, a Victorian romance/mystery title that is $25 but can be purchased for $50 in a special Rosewood box edition lined in black velvet with decorations on the spine and cover that include the Primrose Coat of Arms with a Leaping Stag Crest. She sat next to Alan C. Huffines, whose author's notes in the Book Festival program mention that he is a fifth-generation Texan from Waco and active-duty combat veteran who has written for Military Collector & Historian and is the author of Blood of Noble Men: The Alamo Siege & Battle and A Pilgrim Shadow, a novel set in 19th-century Texas.

The question of the hour was whether Hunt and Huffines were born on the same planet. Fay Weldon, move over: Caroline Rose Hunt dressed up as her own book for Halloween! I kid you not. She explained how she applied her business acumen to the marketing of Primrose Past ("You're not going to buy it if you don't know anything about it") and figured, "If I get [Primrose Past] published, I may as well get some publicity." That explains why it's called Primrose Past; Hunt owns an antiques store called Lady Primrose, and she thought titling her book Primrose Past would be a nice tie-in with the store. Huffines bristled at all that. He made it clear that he doesn't like selling himself; he purposely doesn't have an agent, thank you very much. If you want to know how experienced Texans interpret the word "frisson," there it is.

Between those extremes lay other intriguing insights. Given the cue by Swift, Angie Cruz, who is not a Texan but put one in her novel Soledad, trotted out that old faithful topic among first novel panels, Writing What You Know. But she had something interesting to say: Her mom looked at the blurbs that appear on the back jacket of Soledad and said to her, "You told all the family secrets!" Then she read the book and said, "Who are these people?"