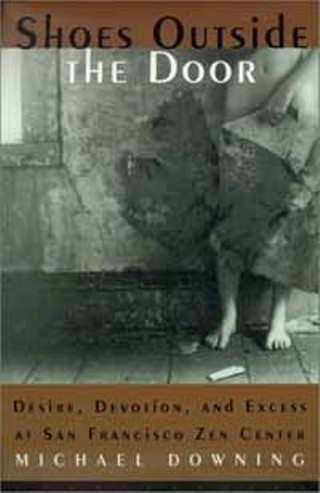 Shoes Outside the Door: Desire, Devotion, and Excess at the San Francisco Zen Center

What happens when a dharma bum gets stars in his eyes, wants more than a bag of rice and some green tea? What do you do when Japhy Ryder trades in his tatami for a BMW? Shoes Outside the Door tells the story of the uniquely American dilemma of Buddhism's stateside emergence in the Sixties, its grotesque ballooning and inevitable meltdown at the hands of egos larger than Zen should ever allow.

In the early Sixties, a small but devoted group of acolytes formed a study group around Zen priest Shunryu Suzuki. He had come to America from Japan in order to find a dharma heir as a result of his dissatisfaction with the Japanese system, in which temple leadership is passed from father to son, regardless of merit. Among Suzuki-roshi's idealistic young disciples was Richard Baker, recently married, far from humble, the pick of the litter. Suzuki-roshi took Baker under his wing, taught him the ropes, and installed Baker as Abbot of Zen Center in 1971.

In the years leading up to Baker-roshi's inheritance of Suzuki's American Zen empire, Zen Center had grown from a small group of green Buddhists looking for a quiet place to meditate to an operation with a $200,000-plus annual overhead. The group acquired property after property, including the remote Tassajara hot springs resort near Big Sur, which functions as a monastery and family getaway; and Greens, the upscale vegetarian restaurant where the hippie glitterati went to see and be seen as they noshed on sprouts and sipped wheatgrass. Zen Center had celebrity cachet as well, with folks like Gary Snyder (on whom Kerouac based Dharma Bums hero Japhy Ryder), Peter Coyote, Linda Ronstadt, and Ken Kesey dropping in to dine or meditate. But in 1983, the empire looked ready to topple, due to Baker's indiscretions with Anna Hawken, wife of major Zen Center investor Paul Hawken (of upscale gardening company Smith & Hawken), not to mention his bald abuse of Zen Center finances. Referred to as the Apocalypse, Baker's actions left lives in shambles and marriages in dust, which is not Buddha nature, but not not Buddha nature.

In preparing for this book, author Michael Downing interviewed more than 80 people who had been affiliated with Zen Center at some point in its 30-year history. Some are bitter, some aren't; what is remarkable is how candid these people are, how willing they are to open themselves to the critical eye of a curious writer. If anything, they are the living embodiment of the Four Noble Truths, especially Number One: "The truth of Suffering, which is the truth of existence."

Downing unpacks Zen Center's story deftly, drawing the reader in with his comfortable, chatty prose and wry wit. Despite any admiration or dislike he may feel for his subjects, he delivers the dirt in just the right tones, knowing when to use a lighter, more subtle touch or employ a more brash approach, simply by using a confrontational, nonsensical Zen word: Kwatz! The intrigue of the story will draw you near, but it is Downing's nuanced delivery of the facts that will make you stay, hungry for more.

Shoes Outside the Door: Desire, Devotion, and Excess at the San Francisco Zen Center, Michael Downing