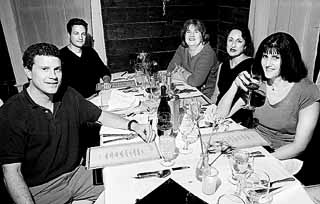 Scott Blackwood coordinates the Undergraduate Writing Center at UT; his first collection of short stories, In the Shadow of Our House, was published by SMU Press this summer.

Anne Dingus is what her father calls "a career Texan." She is a native of Pampa and a graduate of Rice University. Since 1978, she has worked for Texas Monthly, where she is currently a senior editor, writing most often about pop culture, entertainment, and Texas history. She is also the author of four books of Texana.

Carol Dawson, back in Austin after a year as the Writer-in-Residence and fiction/creative writing professor at The College of Santa Fe, has published four novels and one book of poetry. Three of her novels were named in McFarland and Company's The Best Novels of the Nineties. Currently she is writing a suspense-thriller based on an unsolved murder in her hometown, Corsicana, a central Texas hamlet world-famous for its fruitcake production.

Katherine Tanney is a native of Los Angeles living the dream in Austin, Texas, since 1996. Her first novel, Carousel of Progress, was published in July 2001 by Villard/Random House. She holds a master's degree in the art of fiction, has taught creative writing courses, and is currently working on a second novel.