Susanna Kaysen Lays It on the Line

The "Girl, Interrupted' author is not screwing around in her new memoir 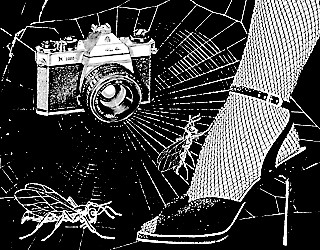 The Camera My Mother Gave Me (Knopf, $21) by Susanna Kaysen is a memoir that has nothing to do with either the author's camera or her mother. It is about her vagina. It is the chronicle of a mysterious and intractable medical problem she had with this little-discussed part of the body, and of the interesting experiences she endured in what I think of as Patient-World, the alternate reality inhabited by those of us who have something wrong with our bodies. In fact, the closest literary precedent to the path Kaysen follows in these pages is Alice's in Through the Looking-Glass. What happens to her is astonishing, amusing, scary, and often totally fucking crazy.

Those who have been waiting for more from this writer since Girl, Interrupted will not be disappointed. Kaysen's deadpan, ironic, stripped-down style of telling and razor-sharp intellect accompany her into the world of dysfunctional vaginas just as they did into the world of mentally ill teenagers. (Please, if you have only seen the movie Girl, Interrupted, do not be misled into thinking you have had an experience related in any meaningful way to reading the book. I liked the movie. It was a fine movie. It just had almost nothing to do with the book, Hollywoodizing the story past recognition. In fact, there isn't any story in Girl, Interrupted, which is kind of the whole point, so you can just begin to imagine how serious the disconnect might be.)

If you have a vagina you know that most of the time it is without sensation. How do your kidneys feel? How does your pancreas feel? Luckily, we have no idea how these things feel. The vagina is mostly like a pancreas and feels nothing. If it feels something, it is either erotically engaged or ill.

All this is obvious if you have one. But half of us don't.

These first lines of The Camera My Mother Gave Me represent one of the modes of which Kaysen is master: nearly philosophical, absolutely direct, with a dark laugh bubbling just beneath the surface. She is also great at rendering conversation and relationships with similar simplicity and humor:

What did the pussy nurse say? asked my boyfriend that night.

She said we should try to fuck.

I'm making dinner, I said. I knew that was a stupid objection. I could have stopped making dinner. We missed plenty of dinners before my vagina got sick.

As Kaysen wends her way from internist to gynecologist, from alternative health nurse to biofeedback specialist, from blue-collar boyfriend to molecular-biologist buddy, her sensibility is her only defense against the madness. And even it can't help her much with the sometimes painful, sometimes disconcerting, sometimes nonexistent effects of all the creams, teas, soaks, pills, and other medications and treatments foisted upon her.

Girl, Interrupted came out in 1993 -- a year before The Liars' Club, and substantially ahead of the many, many other memoirs published in the period that followed. Right after reading Camera, I reread Girl, Interrupted, then immediately reread Mary Karr's book too. It was an interesting exercise. Kaysen and Karr are as different as they can be. There is little writing lusher than Karr's, little sparer than Kaysen's. A sense of story, of plot and character development, is central to Karr's way of remembering; Kaysen's is almost anti-story, working in fragments that often read more like prose poems than chapters.

With her second book of nonfiction (she is the author of two novels before G.I.), Kaysen gives us an even better opportunity to analyze her sense of how to do memoir. As a person involved in that issue both as reader and writer, I jumped on the opportunity to talk to her about it in a recent phone interview. I reached the curmudgeonly and reclusive Kaysen hunkered down at her apartment in Cambridge, smoking cigarettes (in Girl, Interrupted she confesses that one of her many reasons for choosing writing as a career is that you can smoke without people bothering you) awaiting the publication of her new book.

Austin Chronicle: Are you excited?

Susanna Kaysen: No. I like to stay home and write. I'm not so good at interacting.

AC: Well, surely it's going to be a big to-do. I don't think anyone has written a book about genitals in the way you have.

SK: It's not all that different from Henry Miller or Phillip Roth. The genitalia as the center of existence, of everything we do or think -- I like to think it's part of a long tradition.

SK: You're right. It's different. So probably instead of seeing me as part of a long tradition, they'll just say why won't I stop whining about my pussy.

AC: It's been eight years since Girl, Interrupted. Now you've written two novels and two memoirs. Why did you choose to stay with nonfiction?

SK: It just happened. It was inadvertent. I started writing down things that were happening to me and I liked what I wrote, so I kept going. I would really like to write another novel but I don't seem to be able to, and readers seem to like memoirs. But I tell you, this is the end of memoirs for me. There are too many of them. People think they're real but they're not. They're just as full of self-deception and occlusion as a novel.

AC: So you hate memoirs?

SK: Well, I don't. Certainly I don't hate Survival in Auschwitz. I feel that people don't treat them as artifacts. They should be constructed as artifacts.

AC: What do you mean by "artifact"?

SK: That they're shaped, honed, scraped at. The author tells you what the author wants to tell you in the way the author wants to tell you it. I don't expect memoirs to be true in every detail, and I don't think that the fact that they're true automatically makes them interesting. What makes the facts interesting is that they are told in a way that resonates with somebody else's experience. Which is exactly what you do in a novel. I don't see that much difference between writing a novel and writing a memoir.

AC: But in a memoir you have a responsibility to the truth.

SK: It's the same in the novel -- you can't betray the truth of human experience as you understand it.

AC: "Artifact" seems like a very apt description of your memoir style. It's snapshotty, immediate, shards of experience arranged on a page like pictures in an album.

SK: Yeah, but with Girl, Interrupted I had 25 years between the experience and the writing. This was done more as it happened.

AC: Maybe that's why Girl is not strictly chronological and this one is.

AC: One thing that struck me when reading Camera is the bravery it takes to present things so simply.

SK: I hate when people mention bravery. It seems off the point. When you're a writer you have to be cold-hearted, or cold-blooded. If it means being that way about yourself, that's the way it is. You have to have some sort of distance.

AC: What struck you when you read the book the first time?

SK: I felt it was very short. I felt that many reviewers would soon be calling it slight. I guess I did feel that some of it was sort of interesting. I don't think anyone has written about some of this before. Not the medical stuff, but about desire and desirability. About having sex when you don't want to. About being a girl, and the pressure to be a sexual object. About the ickiness of getting old, becoming this kind of painted ridiculous spectacle of an older woman.

SK: I know how it's going to be. Everyone's going to want to know if I have a boyfriend now. Why is it so humiliating not to admit to not being able to have sex?

AC: I predict you will have sex someday. Like in that fantasy at the end of the book.

SK: That was a fantasy. I'll probably never have a date again.

SK: I like being a pessimist. But what I'm saying is sex is central to people's existence whether you're having it or not. Not having it defines you in a different way. And lots of women have had pussy ailments that made it painful or downright impossible to fuck for a week, for a year. So they know.

AC: What about your mother, mentioned in the title but not in the book?

SK: She's been dead 10 years. I don't know what she would think of all this. But the title actually comes from a Buñuel movie, Viridiana. There's a scene in which all these drunk, dirty characters are sitting at a banquet table and someone says, "Let's take a picture!" A woman gets up and faces the group. "Where's the camera?" someone calls out, and she says, "I'll take it with the camera my mother gave me," and she pulls up her huge peasant skirts. I have to confess she actually says, "I'll take it with the camera my father gave me," and I remembered it wrong.

AC: That's memoir for you.