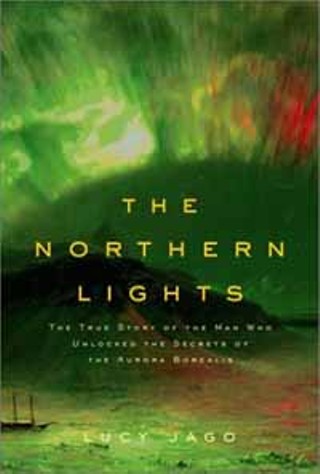 The Northern Lights: The True Story of the Man Who Unlocked the Secrets of the Aurora Borealis

Who would have expected a page-turner about a 19th-century Norwegian physicist? Lucy Jago's Northern Lights opens with 31-year-old Kristen Birkeland caught halfway up a mountain during a fierce Arctic storm. It's the beginning of winter, the guide is hiding under his sled, the bread is frozen, the reindeer refuse to go any further, and the party has only a thin strip of canvas separating them from deadly winds. Despite appearances to the contrary, Birkeland and his team are scientists, not experienced polar explorers. Birkeland was traveling to a specially built mountaintop shelter to study the aurora borealis, or northern lights. Setting out for a spot near the North Pole during the completely dark Arctic winter -- the better to see the lights -- Birkeland and his team had the latest in scientific equipment and the warmest of reindeer skins. Even so, it was a dangerous journey into an inhospitable environment.

While his name is almost unknown today, Birkeland was the most famous Norwegian scientist of his day, even if members of the international scientific establishment discounted his findings. His Arctic explorations were only one part of his interesting career: He was the technical half of the team that created what is today Norway's largest employer. He was considered for a Nobel Prize, but politics took him out of the running. He proposed theories about space that weren't proved true until the Sixties. His ideas for creating margarine from hydrogenated oil and making caviar from cod roe were commercially successful.

But for Birkeland, scientific discoveries weren't just important for science; they were important for Norway. At the turn of the century, Norway was part of a taxation-without-representation union with Sweden and was chafing badly under the tyranny. It must have been an exciting time to be a Norwegian, however, what with playwright Henrik Ibsen, composer Edvard Grieg, and painter Edvard Munch all working in the Norwegian capital of Christiania (as Oslo was then known), and Jago makes Birkeland's contributions intimately fascinating. She has taken an interesting life and told it with pacing and excitement. Northern Lights is a commercial biography, not an academic one, and doesn't get bogged down in the minutiae that so often make reading a biography an insurmountable task. It's a 19th-century life, told with streamlined 21st-century élan.

Northern Lights: The True Story of the Man Who Unlocked the Secrets of the Aurora Borealis, Lucy Jago