A party for Kinky Friedman's new book of etiquette and other upcoming literary events in Austin. 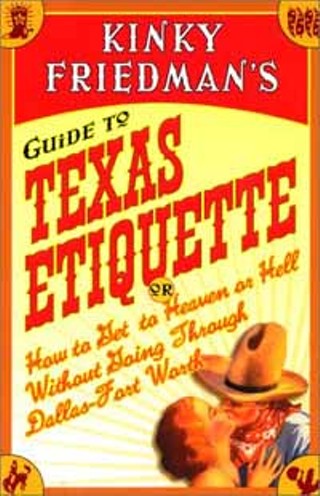 Kinky Friedman is known for many estimable things, and putting on a good show is one of them. But next Wednesday, Oct. 3, he's going to have some help: Sarah Bird, Liz Carpenter, Molly Ivins, Mayor Kirk Watson, and John Kelso, among others, will be reading from the Kinkster's latest, Kinky Friedman's Guide to Texas Etiquette, or How to Get to Heaven or Hell Without Going Through Dallas-Fort Worth (HarperCollins/Cliff Street Books, $22.95), which offers such insights as, "A happy childhood, I've always believed, is the worst possible preparation for life." Tom Friedman, Kinky's father, will be the emcee. At Barnes & Noble Sunset Valley (5601 Brodie Lane) at 8pm; Katz's will be providing food. Call 892-3493 for more info... Michael Blake, the author of Dances With Wolves, is coming to BookPeople on Tuesday, Oct. 2, at 7pm, to talk about his new sequel, The Holy Road (Villard, $24.95)... SWT is bringing former U.S. Poet Laureate Robert Hass to the Katherine Anne Porter Literary Center in Kyle on Monday, Oct. 1 at 7:30pm. Call 512/268-6637 for more info... The Writers' League of Texas gave out the Violet Crown Awards last week: University of Texas at Dallas professor Clay Reynolds won for his novel Monuments; Jon Kalb for his book Adventures in the Bone Trade; and Jack Myers, who directs the creative writing program at SMU, for his collection of poetry, The Glowing River. This year an audio book category was added and the awards, bestowed in both fiction and nonfiction categories, went to Ron Miller for Bradamant: The Iron Tempest and to Elaine Davenport for The Best of Texas Folklore 1999. The Teddy Book Award for best children's literature was also announced and Carol Ann Sayle, who runs Boggy Creek Farm, won for Stories From the Hen House. They each received $1,000. Final jurors were literary agents Andrew Whelchel and James Hornfischer, Anita Joye Rizley from Austin Public Library, Glenn Hopp, who teaches English at Howard Payne University, and Michener Center grad and writer Lori Aurelia Williams, whose new sequel to her young adult novel from last year, When Kambia Elaine Flew in From Neptune, is Shayla's Double Brown Baby Blues (Simon & Schuster, $17).