Recent Picks From the Summer Crop 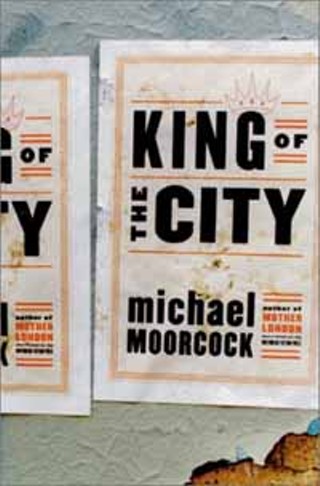 King of the City

Michael Moorcock has written his Pierce Penniless, his supplication to the devil, his invocation and mustering of all the old London spirits. There is, if you like, a novel here, with a plot, but the plot has as much to do with what this book is about as the prize in the Cracker Jacks box has to do with caramel coated popcorn. The plot, in other words, is a disposable bauble you have to dig for. Dennis "Den" Dover photographs his cousin, the supposedly defunct billionaire Jonathan Barbican Begg, tupping an English duchess on a hammock in the Bermudas. This is Denny's scoop of the century, his paparazzo jackpot, but unfortunately his snaps coincide with that seminal sentimental event, the smashing up of Princess "Bigeyes" as she is escaping, by way of a drunken chauffeur and an aristocratic disregard for auto safety, from a raiding pack of photogs in Paris. Dover's scoop is buried beneath the consequent, momentary revulsion against the whole tribe of paparazzi. Since Denny invested his fortune in chasing down Barbican's whereabouts, he's forced to retreat from creditors and the taxman to the resort town of Skerring on the English South Coast and play blues, under a pseudonym, on the pier for a bunch of retired Little Englanders gaping away their silver years in seaside bungalows. It is there that he learns the truth about Rosie, Barbican's widow and Denny's lifelong love -- that far from being the Eve he'd imagined, she was the snake in the Garden. Or at least she is until the last few pages, when the plot takes another, too too implausible turn of the screw.

Rosie is endlessly extolled to us as the sexiest and smartest woman since Marilyn Monroe read The Second Sex, but her appearances in the book feature a dreary woman given to droning wonkishly about infrastructure even as she is ingesting "bloodworms."

It's a pity Moorcock felt obliged to follow plot's rules, for the energy in this book arises from Moorcock's triple-decker jeremiads. Gradually, Dover becomes a genuine study of selling out, as he moves from music to news photography to feeding the Lifestyles-of-the-Rich-and-Famous machine with celeb pix. This gives Moorcock an angle from which he can take potshots at New Economy, New Labour, Globalized England. From Moorcock's perspective, its cultural genocide -- the debasement and defeat of London's working class culture. It withstood the Blitz, but not Blair-era gentrification. The reader might not, in the end, be convinced that the world's really going to hell in a hand-basket because you can't find good porkpies anymore, but you have to respect Moorcock's nostalgia, which has the style of the great 19th-century English doomsayers, Cobbett, Carlyle, and Ruskin.

King of the City, Michael Moorcock