A True Story of Murder, Marines, and the Mojave

As I opened up Twentynine Palms and read the two-and-a-half-page introduction, I immediately murmured, "Oh, my gosh," closed the book, stood up, and wandered in circles, still murmuring, "Oh, my gosh," and adding, "This doesn't read like a true-crime book. This reads like art, literature." It made me want to write like that. But as I read further, I also wanted true crime. I wanted to read about the murders of Mandi Scott, one day shy of her 16th birthday, and 21-year-old Rosalie Ortega at the hands of Marine basketball star Valentine Underwood, a man with a record of rape and violence.

Shockingly (to me, at least), the murder victims aren't even mentioned by name anywhere on the cover, outside or inside. Instead, the author and the Morrow marketing team chose to focus on the desert around Twentynine Palms, Calif. and the Marines who are stationed there.

I wanted Twentynine Palms to be a tale of murder, with a powerful backstory of the Marines and the Mojave. Instead, it's a history textbook of the Marines and the Mojave, and the murder gets lost in the desert. The history textbook portion, though, is often beautifully written. For example, Stillman describes the Mojave as a place where "personal demons aren't demons at all but some other creatures who need a drink." Her details of the lonely, drunken, violent Marines and their Semper Fi mentality that coexists quite unsuccessfully with meth-cooking Crips and Bloods and racist white trash looking for a new life in the desert are indeed powerful. And her fascination with the Mojave is obvious, perhaps too obvious, like the creatures desperate for that drink (which, at least in this book, is not water).

When Stilman finally does focus on the murders, she blows readers away (no pun intended) with the blood and guts and heart of the murder, skillfully intertwining the crime, the trial, and the emotions of the victims, friends, and families. I wept during the funeral. And I cried when Mandi's mother, Debie McMaster, took her daughter's ashes for one last trip through the desert: "In the late afternoon sun, mother and daughter drove deep into the Mojave, past the giant boulders at which they had marveled, past the Joshua trees that had hinted of all the wonder in the world, to their favorite spot. From the car Debie looked across the desert to the beginning and end of time. 'Baby, I fucked up,' she said. 'Big time.' Her tears came and went quickly, this dry zone soaking up, welcoming, needing the grief. Debie smoked a joint and they stayed for awhile. Then she took Mandi home."

She placed Mandi's ashes in the bar where Debie worked, with their pit bull guarding them from loving gangbangers and spoiled, drunken, violent Marines lost in the Mojave. It'd make a powerful ending if Twentynine Palms had been a book about a murder, with only a backstory of the desert and Marines.

Suzy Spencer is the author of two true-crime books, Wasted and Wages of Sin. She is currently at work on her third. 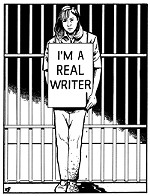 Twentynine Palms: A True Story of Murder, Marines, and the Mojave, Deanne Stillman