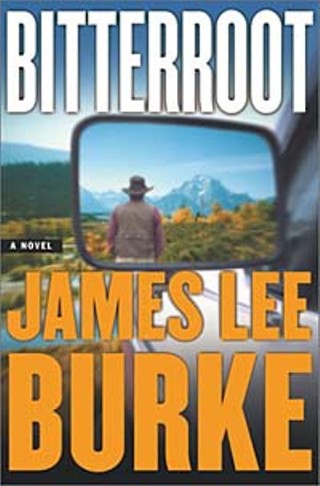 Billy Lee Holland is a haunted man. As the protagonist in award-winning author James Lee Burke's second mystery series, small-town Texas lawyer Holland is a former Texas Ranger haunted by the violence in his past, his guilt over causing the accidental death of his beloved friend and partner L.Q. Navarro, as well as Navarro's reappearing ghost. Bitterroot is Burke's third novel featuring the troubled but good-hearted lawyer and this time out, the author sends Holland on vacation to Montana, thereby avoiding the distracting geographic anomalies that made the first two installments of this Hill Country series so annoying. But before he's had much time to escape his personal demons fly-casting in the sparkling streams, Billy Lee and his buddy Doc Tobin Voss become embroiled in violent disturbances with every clichéd group of miscreants in modern-day Montana: There's a nature-raping mining concern, a misogynist biker gang, a heavily armed holy-rolling anarchist militia group, cocaine-sniffing movie stars, self-serving FBI men, an evil rodeo clown, and a half-breed Crow Indian girl descended from one of Custer's scouts. Densely populated with dangerous thugs and puzzling plot twists, Bitterroot is the most enjoyable Billy Lee Holland novel so far.