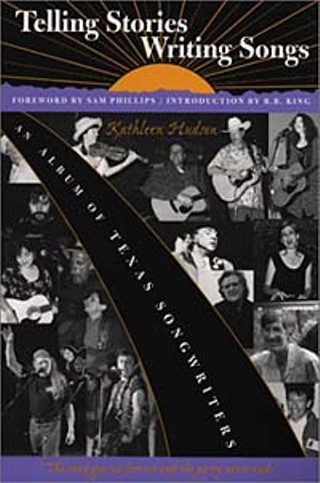 The Austin Music Scene Through the Lens of Burton Wilson, 1965-1994

by Burton Wilson with Jack Ortman

An Album of Texas Songwriters

The photographs in The Austin Music Scene aren't spectacular shots that Rolling Stone missed but rather should be considered cherished heirlooms of the local music community's not-too-distant past. Burton Wilson was house photographer at the Armadillo World Headquarters and his position on the side of the stage allowed for some magnificent viewing in the heyday of progressive rock and progressive country. Freeze-frames like the famous Thanksgiving-day concert with Doug Sahm and Leon Russell, a smirking Gram Parsons, and a sheared Frank Zappa abound. Another shot backstage posits Mance Lipscomb, Bill Neely, and Taj Mahal in a crossing of cultures that happened in few places outside the Armadillo.

The title reference to 1994 is a bit specious and suggests a more thorough inclusion of performers during that time than appears. Wilson's ouevre begins with priceless portraits -- Mance Lipscomb in 1965, the Johnny Winter Trio, Big Joe Williams, Jimmie Vaughan in Storm, Jimmy Reed -- but wanes by 1974. Two pages after 1976, it's 1991 at La Zona Rosa. Wilson soon closes, appropriately, with shots from the Armadillo reunion at the Coliseum in 1994.

But the most beloved treasures are full of flaws and if Peter Frampton's face is out of focus, the energy and spirit is still vibrantly apparent. Wilson's lens was also around to capture Angela Strehli with James Polk, John Lee Hooker with Hubert Sumlin and Walter "Shakey" Horton at Antone's, and a seldom-seen moody, mezzo-tint portrait of Janis Joplin, taken six weeks before her death. Like all family photographs, his pictures of Willie Nelson picnics, Eastside bars, afternoons in the park, and the nightlife of another generation won't mean much to anyone but us. And to some, they mean everything.

Telling Stories, Writing Songs: An Album of Texas Songwriters is an ambitious effort that doesn't quite succeed. Author Kathleen Hudson interviewed an impressive array of folks for her project, getting Sun Records' Sam Phillips to write the foreword and B.B. King to write the introduction -- which is sort of where the confusion begins. If this is about Texas Songwriters, why Phillips and King? While the composer names are stellar (Willie Nelson, Lyle Lovett) and eclectic (Blaze Foley, Sonny Curtis, Kimmie Rhodes), they are also puzzling. Darrell Royal was a beloved football coach but his views on songwriting are negligible at best and fatuous at worst. Part of the problem is that Hudson's interview technique is dry and academic much of the time and annoyingly gushy at others. The interviews were conducted over such a wildly varied period of time that some of the artists had not begun to bloom (like James McMurtry in 1981).

Her frame of reference is not only Tex-centric, it is largely Kerr-centric. Hudson is founder and director of the Texas Heritage Music Festival, so her credentials are good, but it seems unforgivably sloppy to write that Stevie Ray Vaughan died in an airplane crash when it was in a well-documented helicopter crash or misspell Jimmie Vaughan's name as Jimmy. Such sloppiness makes an otherwise valuable resource suspect and make one wonder what else might have been tweaked or misidentified.

What works for Hudson's thesis are the rare interviews with the dead or overlooked, like Townes Van Zandt and Carolyn Hester, or Blaze Foley and Richard Dobson. Some of their commentary is truly enlightening and Hudson's love for the subject and ease with the musicians is evident in their warm responses to her. Still, Telling Stories begs for harder questions and tougher names.